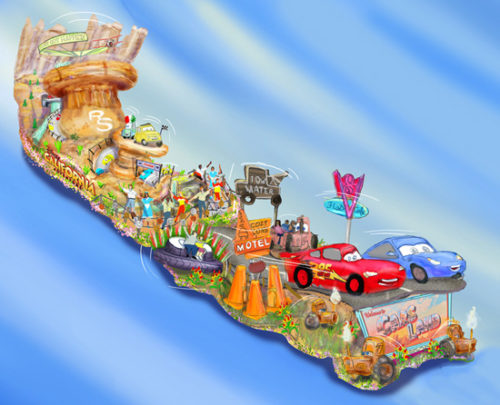 A giant float inspired by Cars Land, the new expansion at Disney California Adventure, will appear in the 124th Rose Parade on January 1, 2013. The parade’s theme is “Oh, the Places You’ll Go” – a perfect tie-in for Pixar’s “Cars”. The stars of “Cars”, including Lightning McQueen, Sally, Luigi and Guido, will be positioned inside the new land’s scenes including Ornament Valley, Radiator Springs Racers, and the Cozy Cone Motel. It will also feature some of the moving elements that Rose Parade floats are famous for.

It’s great to see Disneyland back in the Rose Parade. Does anyone else remember those giant production numbers that used to open the parade each year? This one from 2005, starts at the 1:30 minute mark