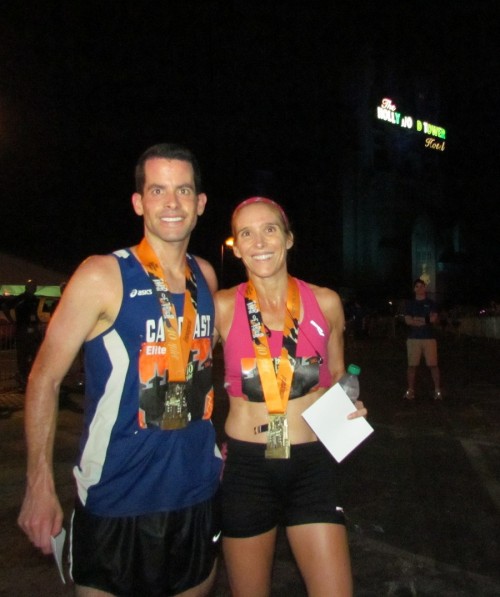 Although we’ve covered many RunDisney events here on The Disney Blog in the past, this was the first event I personally attended. I was impressed with the amount of organization and the number of volunteers required for a race like this. I also understand better why the half-marathon was moved to November, the early fall humidity was a challenge.

Running the race at night made that less of an issue, but the runners I spoke with, including the men’s winner, said it was still pretty intense. Still others enjoyed stopping and getting photos with the characters and sets along the route. I was a little surprised by the lack of any Disney characters are the start or finish line. I know Goofy and Donald have Tower of Terror outfits. But other than that, I felt this was a fabulous event.

Another Golden State runner, Kimberly Mueller of San Diego, was the first woman to cross the finish line. Mueller finished with a time of 1:04:50.

The frighteningly fun course steered runners through ESPN Wide World of Sports Complex before returning to Disney’s Hollywood Studios, past the set of the “Lights, Motors, Action! Extreme Stunt Show” and around Mickey’s Sorcerer’s Hat, finally finishing near the Twilight Zone Tower of Terror attraction.

Finishers received a commemorative medal inspired by the iconic Tower of Terror, then celebrated with a triumphal Disney Villains Hollywood Bash post-race party in the park until 4AM. Guests enjoyed live music and characters and had exclusive access to attractions such as The Twilight Zone Tower of Terror, Rock ‘n’ Roller Coaster Starring Aerosmith, Star Tours and Toy Story Mania. We experienced no lines at any of the attractions we tried. Special photo opportunities were also set up.

More on the event over at this Google+ Photo Album.