Castle 5-1: After the Storm 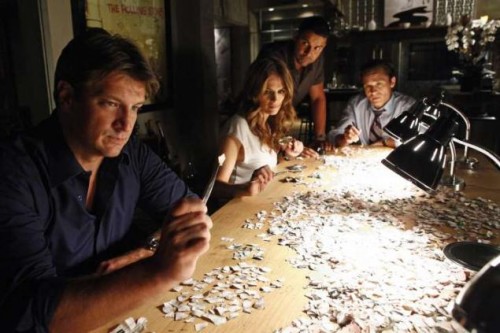 Welcome back, my fellow Castle fans. I trust you had a good summer. Personally, I’ve been looking forward to tonight more than any other season premier of the year. (Well, almost, I’m also very excited about the premier of Once Upon a Time on Sunday.) Yes, that’s how much I still love the season 4 finale.

But we don’t know what kind of summer Beckett and Castle had. See, this episode picked up the morning after the season 4 finale. In fact, Castle wakes up in bed alone, but Beckett soon comes in with some coffee. They start to flirt when Castle’s mom comes in. She was supposed to be in the Hamptons for the weekend, but there she is. Castle quickly sends Beckett to the closet to while he deals with his mom, who is ranting and rambling about something. He puts her off long enough to get dressed and then discovers that Alexis had too much to drink at her graduation party the night before, and called Martha to get a ride home. Castle distracts them to allow Beckett a chance to get out in the funniest scene of the episode. (Although why Alexis wasn’t at a school sponsored alcohol free grad party was a surprise to me. Are those only a California thing?)

Later that day, Castle goes to Beckett’s to apologize for sticking her in the closet. He explains that he wants to keep their new relationship just between them for the time being. She seems upset by that idea until Ryan shows up unexpectedly at her door. She then tries to get Castle to hide, although he points out that he could legitimately be in her living room in the middle of the day. Ryan does ask what Castle is doing there, but they distract him by getting to why he is there.

And thus begins the real plot for the episode. Ryan has tracked down the missing picture from Captain Montgomery’s wedding album thanks to negatives (maybe old school technology isn’t all bad after all), and is hoping Beckett knows who it is. She doesn’t, but Castle recognizes him right off as the man he’s been dealing with over the last year, the man keeping Beckett safe. They know the shooter is after him, so the rush is on to find him.

Unfortunately, they arrive to find that Michael has been tortured and is dying. Plus there’s a file in the fire. The shooter is no where to be found, but as the ambulance is leaving with Michael, he gets part of a message to Castle. “86.” Searching his papers before the police show up, they find a building he owns with that address.

The building is about to be destroyed, and as Castle and Beckett are looking around, they are surprised by the shooter, who ties them up and sticks them in the bathroom. As they are trying to escape before he comes back to finish them off, who should show up but Esposito. He’s been using contacts at the Army to track the shooter, and he’s managed to show up in time to save them. The trio head up to where the man is trying to open a floor safe. They get there just as he opens it. He’s pulling out a second gun when he lifts the file out of the safe – and triggers a bomb. He’s dead, but the other three manage to get out of the room in time to avoid any serious repercussions.

Well, there is one repercussion. When Captain Gates shows up at the scene, she reads them the riot act. But they stick to the story that they happened to be in the area when they heard the bomb go off and rushed in to see if they could help.

About that time, Michael Smith wakes up from surgery, and Castle and Beckett go to see him. He refuses to tell them what was in the files or really provide any more clues. Beckett tries to convince him that they can work together to stop the people now out to kill both of them, but he plans to just disappear. Beckett and Castle leave, but they haven’t gone too far when the man who was guarding Michael shows up. Seems he had been ordered to leave. They rush upstairs to find that Michael is dead – a heart attack.

Beckett, Castle, and Esposito are regrouping at Beckett’s when Ryan shows up. He and Esposito are still definitely on the outs, and the tension between them is obvious (especially when Esposito refuses to lower his gun, even when he sees who it is). Ryan has brought the paper from the files that blew up, and the four of them spend all night trying to piece anything together.

Eventually, they do figure out they are holding a bank transfer notice from the 90’s. Using a database of all banking information, they find that the owner of that account is the man who is currently one of New York’s Senators and the man many think will become President one day. In a brilliant piece of casting, he’s played by Jack Coleman, aka Noah Bennett from Heroes. The character completely fits.

Unfortunately, the account is long closed and they have no real hard evidence. In fact, all those who do know are dead except for the four of them.

Frustrated, Beckett takes matters into her own hands, which Castle discovers when he wakes up at her place the next morning. He calls Ryan and Esposito, and they head out to where the Senator is holding a fund raiser, hoping that they can stop her. There is another intense scene where Ryan almost calls the Captain, but Esposito talks him out of it.

By the time they show up and find them, Beckett has managed to get the Senator alone. When he refuses to back down and tries to justify himself, she plays her trump card. She has the file (or so she claims), and she proves it by reciting his former bank account. If anything happens to herself or her friends, the file will be leaked to the media. It’s an uneasy truce (especially since it’s a lie on Beckett’s part), but it seems to keep them all safe, at least for now.

In the final scene, Beckett goes to Captain Gates and asks for her old job back. At first, the Captain seems to hesitate, but then she agrees – after Beckett has served her suspension.

And there you have it, the season 5 opener. Next week looks to be rather funny and pretty much status quo for the team as far as the mystery is concerned. But while they work on the case of the week, Castle and Beckett will still be trying to keep their relationship a secret and Ryan and Esposito will still be fighting. Both should make for some interesting television.

The big question of the night is how will we eventually take the Senator down. You know that’s not the end forever – it’s just a stalemate. I’m also wondering if Michael Smith really died of natural causes or if he was murdered. There are plenty of poisons (at least in the mystery novels I read) that provide what looks like a heart attack. The only reason I’m willing to believe it really was a heart attack is because I’m currently reading the fourth Nikki Heat book, and in it, there is a very similar scene, and the person in the hospital bed definitely dies from natural causes. It will be interesting to see how that plays out or even if it comes up again.

Craving more Castle goodness while we wait for the new episode?  Check out my review of season 4.