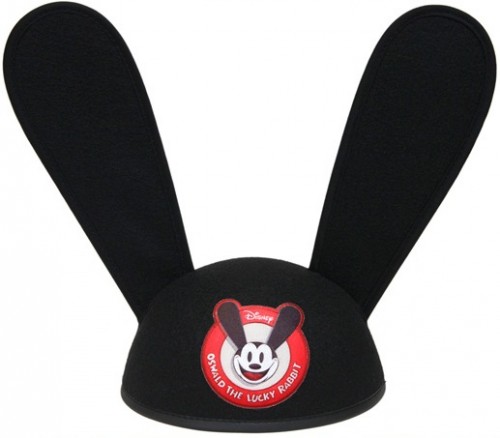 When the folks at Disney Interactive Studios released “Epic Mickey 2: The Power of Two” at the E3 conference earlier this summer, there was a lot of noise generated in the Disney fan community. Unfortunately for Disney Interactive, that noise was about the promotional merchandise they had created and not the game itself.

So what were those prized pieces of promotional swag? They were Oswald The Lucky Rabbit ears. These terrific collectibles mashup one of Walt Disney’s earliest animated characters with a ubiquitous piece of Disneyana – Mickey Mouse Ears. Only instead of the round ears you expect, there are large rabbit ears. Classic.

As soon as pictures of the little beauties leaked onto the internet, there was a cry to have them for sale in the parks. Turns out Disney was listening and has now announced that come late October/early November you too will be able to buy your very own set of Oswald Ears. According to the Disney Parks Blog, they feature a new Oswald Logo other than the one related to the game promotion. How cool is that?