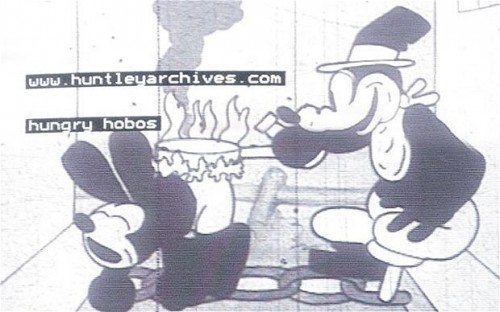 Last year a British film archive discovered a print of an 1928 Oswald The Lucky Rabbit short that had previously been thought lost. “Hungry Hobos” was the 20th out of 26 Oswald films worked on by Walt Disney and his team of animators before he lost control of the character.

After acquiring the film from the archives, Walt Disney Animation Studios set about to digitally restore the film. Dave Bossert, producer/creative director and head of special projects for WDAS, said, “Walt Disney Animation Studios is dedicated to preserving and restoring our film legacy and the art of animation. In restoring ‘Hungry Hobos,’ we were able to address such issues as warpage, dirt removal, broken sprocket holes, light flicker and film weave. The end result is a highly entertaining and historically important film that is part of our Disney heritage.”

Disney invited animation historian and preservationalist Serge Bromberg to present the film at its re-debut at the Telluride Film Festival. Bromberg said, “We are very grateful to Disney for letting us debut this newly restored Oswald short in Telluride. The film has some wonderful gags, and provides an excellent look at the early work of Walt Disney before he created Mickey Mouse. We salute Disney’s efforts to preserve its cinematic past…”

“Hungry Hobos” was overseen by Walt Disney in 1928 as part of a distribution deal with Universal Pictures. Oswald The Lucky Rabbit is the long-eared precursor to the more famous Mickey Mouse (who appeared for the first time later that year in “Steamboat Willie”). The film follows the misadventures of Oswald and his roughneck pal, Putrid Pete, as they ride a freight car loaded with animals and devise ways to cook a meal using the tools at hand. When a policeman chases them off the train, the duo poses as a hurdy-gurdy man and a monkey as part of their escape.

Also on the program at TFF (“Serge Bromberg’s Retour De Flamme”) was a sneak peek at Disney’s newest animated short “Paperman,” which premiered at this year’s Annecy International Animated Film Festival, generating excitement in the industry for its innovative hybrid use of computer animation and hand-drawn techniques.

The Walt Disney Company reclaimed its rights to Oswald the Lucky Rabbit in February 2006, when Disney CEO Bob Iger initiated a trade with NBC Universal in exchange for sending sportscaster Al Michaels to NBC Sports. Oswald has since been featured in Disney Interactive’s video game “Disney Epic Mickey” and the upcoming “Disney Epic Mickey 2: The Power of Two,” scheduled for release on November 18.