Wyland, a renowned marine life artist and conservationist, has many popular Disney themed paintings, some of which are worth hundreds of thousands of dollars. He also has a gallery at Walt Disney World, so this tie-in is more than natural. To honor the Pixar movie “Finding Nemo”, Wyland has collaborated with Disney and Pixar to create Nemo’s World, a classic combination of the world’s most famous clownfish and Wyland’s natural undersea universe. Wyland blends the two styles seamlessly to capture the “soul of the sea” in a way both whimsical and realistic.

“Nemo is one of my favorite animated movies and it is an honor to present my vision of Nemo’s world,” Wyland says. “I wanted to take the characters from Finding Nemo and re-imagine them in a classic marine life scene with a living coral reef, sea turtles, and dolphins. I think this painting not only has the natural feel I wanted, but it retains the same adventurous spirit of the original film.” 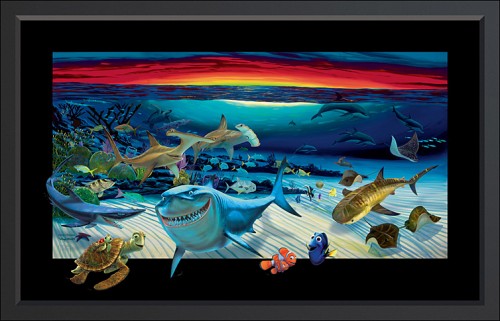 Finding Nemo 3D hits theaters next Friday, September 14, and is available for pre-order on DVD and Blu-Ray (save up to 30% today on Amazon.)