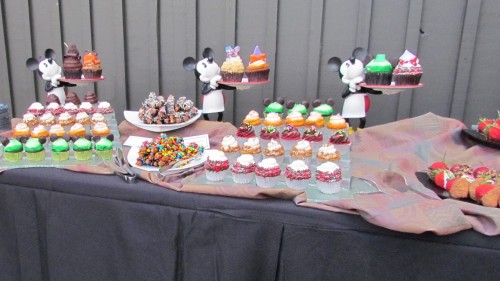 Last night I went to a special event at Disney’s Hollywood Studios and was pleasantly surprised when greeted by an array of delicious cupcakes. Each looked better than the last and was incredibly difficult to resist eating them all, I did break down and try a few (someone had to do it).

Since these cupcakes are seasonal, they may not all be available during your next trip, but if any of them are, you owe it to yourself to try them. They’re that good.

How can you go wrong when celebrating with cupcakes? Disney actually provided “mini-sized” versions of each cupcake for us to taste. I made a personal sacrifice and tried the Star Wars and Easter cupcakes and can attest to their perfection. I didn’t hear a complaint from anyone else who sampled the other flavors either. In addition to the above video, I’ve added some ‘artful’ cupcake photos over on Facebook in a photo album just to really torture you.

Are you a cupcake fan? What do you think of Disney World’s amazing cupcakes?