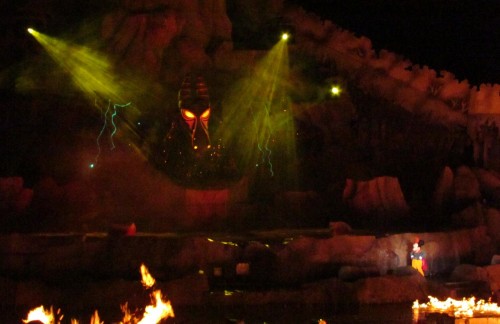 With Fantasmic! and other nighttime shows at Walt Disney World providing over 350 jobs for the local economy, Disney invited a few of us out to meet some of the talent folk behind the show. While there we also sampled some cupcakes and learned about new seating coming to the Fantasmic! Amphitheatre.

According to Dan Cockerell (Vice President of Disney’s Hollywood Studios), “our guests rate our nighttime entertainment experiences as highly as many of our world famous attractions. About 90 percent of Guests who view Fantasmic! from one of the 7,100 seats in the Hollywood Hills Amphitheatre rate their experience as ’Excellent.’”

Of course, guests who were left to stand on special terraces in the back of the amphitheatre while watching Fantasmic! on average rated the show experience lower than those who were able to find seats. It took some time, but Disney now has a plan to solve that. According to Cockerell, the numbers from Disney’s research arm, showed that making a simple change, such as replacing standing with seating, would make a big impact in guest satisfaction. And a happy guest is one who is more likely to buy merchandise or spend more.

Since the new seats won’t add capacity (the show will still only be able to pack in around 9,000 guests each viewing), it may not seem like a big deal, but I think it’s a great move for the park. New seats are an example of Disney making an adjustment that doesn’t appear to be necessary up front, but will lead to a better guest experience. It may not be as big as adding a new attraction, but if you’re the family that gets to sit down to watch the show instead of having to stand after a long day in the park, it is a big difference to you.

As far as the guest is concerned, almost every night Fantasmic! goes off without a glitch, providing the perfect way to end the night at Disney’s Hollywood Studios. But that polished experience wouldn’t be possible with over 140 cast members working to make Fantasmic! one of Disney’s top shows. Here we talk to two behind the scenes cast members who are crucial to the show.

A few other facts about Disney’s night time offerings:

Currently only one park lacks a night time show? Do you think a night time experience would ever work at Disney’s Animal Kingdom?