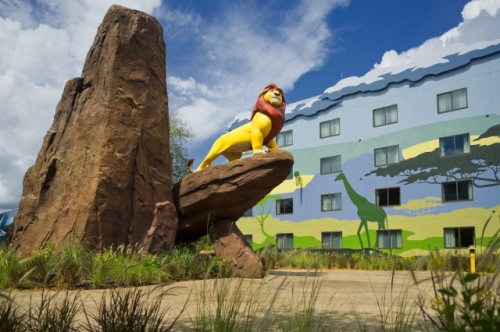 Today the first guests will be checking into the Pride Lands of Africa which is the setting for The Lion King, the third phase of Disney’s Art of Animation Resort. The new Lion King wing celebrates the journey of Simba, with landscapes and theming that reflect playful and poignant scenes from the Academy Award-winning Walt Disney Pictures animated film “The Lion King.”

In the new Lion King wing, guests embark on a journey through Africa with encounters with characters and scenic moments from the film classic at every turn. King Mufasa towers atop Pride Rock while his evil brother Scar slinks in the shadows beyond the elephant graveyard. There’s Pumbaa and Timon with a young Simba dancing across a log bridge in true carefree “hakuna matata” fashion. Scar’s crazed and comical hyenas “guard” the elephant graveyard, a fun area sure to delight youngsters. 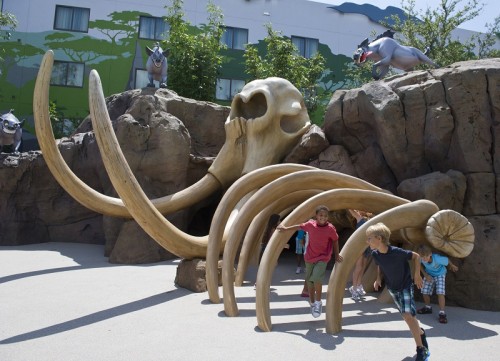 The storytelling comes to life inside the 320 family suites. Zazu takes center stage on the headboards while Pumbaa and Timon decorate the shower curtain. Youngsters can rest on a leaf-shaped chair or sleep alongside Simba who slumbers at the head of one of the beds. 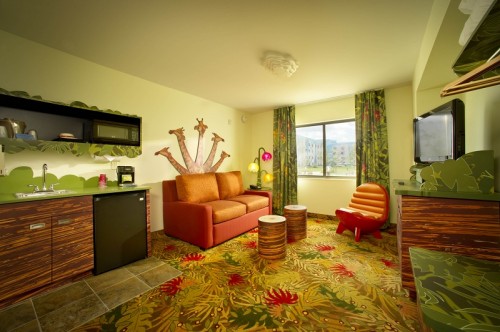 I have to say I’m a pretty big fan of the design of this room. It’s quite a bit busier than the Nemo and Cars rooms.

The whimsical property, situated adjacent to Disney’s Pop Century Resort, offers rates from $248 per night. The 1,120 family suites include two bathrooms, a kitchenette and three separate sleeping areas that can sleep up to six. The 864 standard rooms at the “Little Mermaid” wing, opening in September, will sleep up to four, with rates as low as $94.