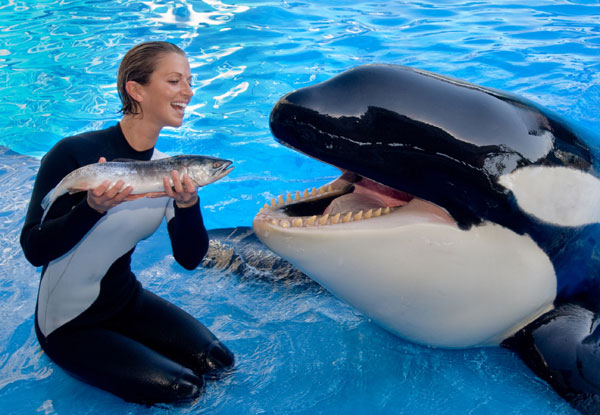 Where we last left the SeaWorld Killer Whale OSHA case was that a judge had declined to hear SeaWorld’s appeal and that trainers would not be allowed to be in the water with the animals without a barrier. SeaWorld pointed out in their appeal that the ruling only applied to on-stage activities, despite the fact that the attack on the trainer occurred in a backstage area after a performance. This was part of their attempt to get the case over-turned. It didn’t work, yet. But it does leave the door open for an appeal. It also means that, if SeaWorld wanted to, they could re-introduce trainers to the Killer Whale population at its parks, as long as it’s not part of any performance.

It looks like SeaWorld is testing the waters by beginning to perform acclimating exercises to get the killer whales use to interacting with trainers again. According to this report in the Orlando Sentinel, no decision has been made if there will be full immersion, but these sorts of behaviors are important to the long term health and care of the animals.

There were definitely flaws in the OSHA’s case. While I’m not a lawyer, it seems like a clear cut case that SeaWorld will eventually win on appeal. If trucking companies were held to the same standard of care as SeaWorld is being held, no one would ever get their food or other products delivered. After all more truck drivers are harmed or killed in trucking accidents every day than have ever been harmed or killed by a Killer Whale at any of SeaWorld’s parks. There is a risk, drivers acknowledge it when they get a license to drive, SeaWorld trainers, the best trained in the industry, acknowledge it when they are cleared to enter the pool with a whale for the first time. OSHA wants SeaWorld to say that because someone was once harmed by a whale, they should know not to allow trainers in the water ever again. That trainers, like truck drivers, aren’t capable of evaluating risks on our own. This is clearly not the case and, the debate over whether captive animals is a good idea or not aside, SeaWorld is the best at what it does. If they can’t provide the right training and safety, who can?