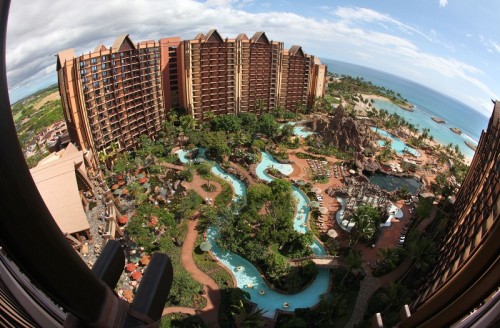 Read the Disney travel forums and search the blogs and you will encounter numerous trip reports from Aulani that go something like this:

“The hotel is beautiful and Disney has outdone itself immersing guests in Hawaiian culture. Unfortunately the hotel is too far from anything, the dining options are unbalanced and too expensive, and it’s difficult as a guest to book some of the resort’s amenities. Other than that, I love it and you sure can’t beat the view.”

That’s damning it with faint praise. The hotel was designed to be half DVC and half regular hotel guests and it was always known that there would be a test and improve phase to see how that mix would work out. Well, now they know that changes are needed.

The announced plans include an expansion of the popular Waikolohe Valley pool area as well as the addition of two new quick-service dining options. In addition, the Starlit Hui show, a family favorite, will move to a larger venue so more guests can experience the performance.

That should help with many of the most common complaints I’ve read. There’s only so much Disney can do about Aulani’s isolation. That is also part of its selling point.

“Aulani has been exceptionally well received by our guests, and we are excited to add new amenities,” said Elliot Mills, vice president and general manager of Aulani, a Disney Resort & Spa. “The resort has one of the most extensive arrays of recreational offerings in Hawaii. From its winding streams and interactive play features to its private snorkeling lagoon, our Waikolohe Valley pool area offers something to delight every member of the family, and we’re thrilled that soon there will be even more to enjoy.”

Scheduled to begin in September and conclude in mid 2013, the expansion is happening in conjunction with the final build-out of the resort. More specific details of the expansion will be shared at a later date.