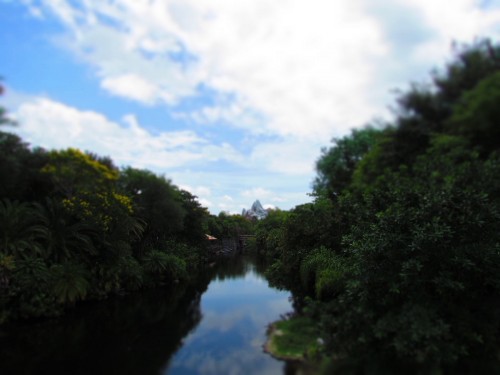 It’s been a few weeks since we visited Disney’s Animal Kingdom, so we’re overdue for a photo update. We’ve also got some good rumors to discuss.

You may have heard that DAK is starting a ‘Sundowner Celebration’ with extra entertainment and unique food offerings in an attempt to keep people in the park after the parade. It didn’t work for us, we had to leave before Noon. This truck was parked up front with a giant sign advertising options of activities to enjoy before sundown.

Here’s one of the street party locations. It does clutter up an already busy walk-way, but I like the idea of extra entertainment in the park. 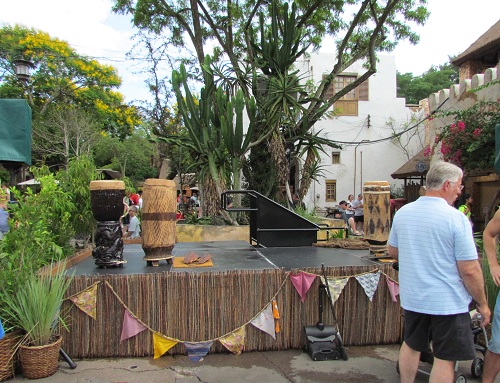 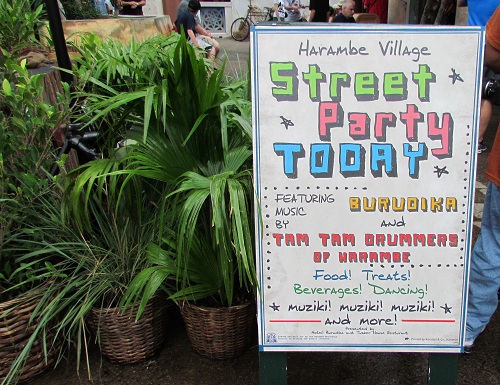 And Asian Style Hot Dogs are among one of the food choices you have to explore. Alas they weren’t open in time for an early lunch. Speaking of lunch, a stop by Flame Tree BBQ always pleases the olfactory senses. I like that they’ve added a bank style queue, but without a cast member to dispatch guests to registers it isn’t that effective. One of the award winning artists from last year’s Pageant of the Masters has been given a place to sell his wares. The wide landscape portraits are amazing, and, for the most part fit with the theme of DAK. Unfortunately these nets necessitated by pieces falling off the Tree of Life, don’t fit in with the theme. But until they can figure out a permanent fix, we’re stuck with them. Thankfully they haven’t closed off the path behind the tree, but it does obscure the tree from a few vantage points. 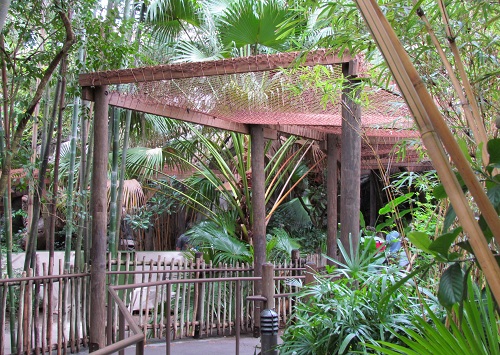 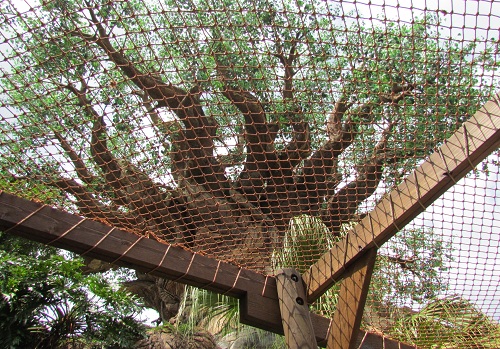 I’m not a big fan of the theme of a parking lot attraction that is Dinoland, but if you’re going build it, at least maintain it. This sign is faded by the sun and obscured by tree branches. Looks like Disney and Universal aren’t the only ones raising prices in Orlando. Chester & Hester get in on the act in a bit of humor that I’m sure guests who just dropped $89 plus $15 in parking do not appreciate. 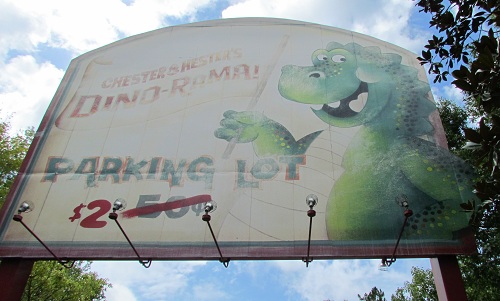 Despite problems with the Yeti, light leakage from under the track, and the failure to build the whole mountain (resulting in an ugly view of the showbuilding from the parking lot),  Expedition Everest is a great roller coaster, even by Disney’s standards. But can’t they find money in the budget to replace some of the worn out set decor and clean up the gum and rubber bands by the side of the track? It takes you out of the moment when the real world intrudes. Riding Expedition Everest does provide a great view of the surrounding Disney property including this plot below between Forbidden Mountain and Rafiki’s Planet Watch. Once rumored to be the location of ‘Australia’, it’s now considered a potential location for Avatar-Land. I don’t see any work being done yet, but it could start any day now.

Of course, the other option to build is to take over the area currently held by Camp Minnie Mickey (there’s a rather large plot of unused land behind Rainforest Cafe too). And a cast member update has people wondering if this will be Avatar’s new home instead. The cast portal had a note that Beastly Bazaar will be converted into a character meet and greet location with a closing date of August 12th. 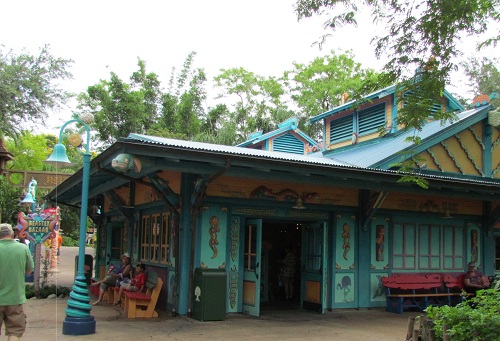 If the fab five move to Discovery Island and out of Camp Minnie Mickey, this clears the way for Avatar-land to start building with a goal to open by 2016 when the third Avatar sequel is entering movie theaters. Of course, there is one other big domino to fall in this scenario, The Festival of The Lion King would have to be moved. There is room in Africa, but it would require moving around some backstage buildings and roads.

I’m still leaning toward the plot between Everest and Rafiki’s Planet Watch. It’s bigger and solves a few problems for that area of the park. As long as the attractions are mostly indoors, it won’t be a sound intrusion on Kilimanjaro Safari either.

Which site do you think would work best for Avatar?