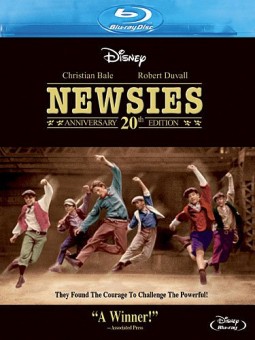 Though films like Cinderella, Pocahontas and The Rescuers received the bulk of the attention when Disney revealed their impending major home video push—more than 30 Disney films will be released for the first time on Blu-ray in 2012—several more obscure titles will be hitting store shelves soon.

Probably the most relevant of these upcoming releases is the 20th anniversary edition of Newsies (in stores June 19 or pre-order today). The cult-favorite is the basis for the current Broadway musical hit of the same name.  Newsies The Musical won two Tony Awards this past Sunday, including Best Original Score for Alan Menken and Jack Feldman.

Aside from the Diamond Edition of Cinderella, other fall releases include Atlantis: The Lost Empire, Brother Bear, Hocus Pocus and a trilogy set of The Santa Clause films. The Great Mouse Detective, a personal favorite, is scheduled for Blu-ray release on September 18th.

For a complete run-down of what will be available from Walt Disney Home Entertainment for the rest of the year, checkout below the jump:

I didn’t put down every variation of the DVD and Blu Ray combo. But you can find most of theme on Amazon for pre-order