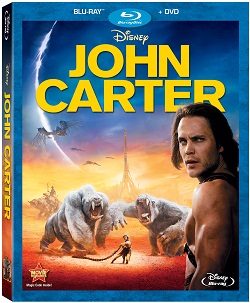 John Carter may have failed at the domestic box office, but I don’t believe the final tally reflects the true potential of the film. The movie has just been released on DVD and is a worthy addition to your collection. Director Andrew Stanton did a great job translating a book that is a bit foreign to modern audiences into a live action film. We have a new interview with Stanton below and a chance for you to win a copy of the Blu-ray DVD.

If you missed it in the theater, the epic tale of John Carter is a sweeping action-adventure based on Edgar Rice Burroughs’ classic, A Princess Of Mars. Set on the mysterious and exotic planet of Barsoom [aka Mars], the movie is an inspirational adventure filled with stunning special effects, jaw-dropping action sequences and unforgettable characters.

The movie’s lead character, John Carter [played by Taylor Kitsch], is a war-weary, former military captain who’s inexplicably transported to Barsoom and reluctantly becomes embroiled in an epic conflict. It’s a world on the brink of collapse, and Carter rediscovers his humanity when he realizes the survival of planet and its people rests in his hands.

We catch up with director Andrew Stanton in this interview:

How did the fact that you were a huge fan of Edgar Rice Burroughs’ Barsoom book series affect your work on John Carter?
Once I got the job, I knew that as a writer I had to stop being a fan because it can blind you. You have to do that with your own work, too; even when you have your own original ideas because you can fall in love with them and they can blind you from the adjustments that you’ve got to make in order for the project to work. That’s the reason I like to work with other writers; it helps keep the objectivity alive because other writers will tell you if they don’t think an idea is right.

How would you describe your process of adapting the book, A Princess Of Mars, for the movie project?
I’d read and re-read the book many, many times from my teenage years until a few years ago – but I didn’t let myself look at the books while we were writing the story for John Carter. I trusted my knowledge and I gave myself complete freedom to make changes, which was very important for me. The funny thing is that when we finally felt we had a really good script that we were ready to shoot, I then let myself go back and look at the book and it didn’t feel like it had changed as much as I thought we had changed it. In my head, that meant it was like fate; it was meant to have just the slightest adjustment.

How tough was it to cast the lead role?
I felt a lot of pressure when I was casting John Carter; I felt like I was casting Bond or Superman. I first saw Taylor Kitsch in a show called Friday Night Lights and I thought to myself, ‘Here’s a guy that seems broken, damaged and dark, but I can tell that he’s got a soft heart.’ I thought he was perfect. In fact, I could never get him out of my head during the casting process, although I always thought he was too young. He was playing a teenager in Friday Night Lights, but I then discovered he was actually playing a character almost 10 years younger than he was in real life. I was incredibly happy when I could consider him as an option.

How old is John Carter?
When I first started work on the project, I thought that Carter was 40. However, I soon realized that most people who fought in the Civil War were 19 years old. That’s when I decided to trust history, and I was psyched because I wanted Taylor to play Carter. He was 26 going on 27, which worked well for the movie.

What made Taylor Kitsch stand out from the other actors who auditioned for the role?
Taylor is a natural talent. He has incredible instincts and such great, raw qualities. I felt like the luckiest guy in town to have captured his fire before everyone else had saturated it. He was exactly what I wanted for the role of John Carter. He’s viral, charismatic, and dark – and you’d be hard-pressed to find an actor with his work ethic because he brings 150% every time he has to come up to the plate.

What drew you to Lynn Collins for the role of Dejah Thoris?
Dejah has such pressure on her. She’s the next in line to the throne and she has to try to save this world when it’s failing. However, Lynn Collins came into her audition with a sense of strength and passion inside her core. Immediately, I knew that’s what I’d been looking for. I wanted somebody who was like the women I knew in my career; they have to close off a little part of them to be career-tough, but they fall into the trap of believing that if they’re vulnerable at all, it’s a weakness. The pressure on Dejah to try to save the world didn’t allow her to be vulnerable, and I mirrored that with her costume. I slowly stripped away the armor and the under-armor. In the end she’s exposed, naked on the bed, and she can finally just be herself and trust Carter.

Will you continue to make live-action films or will you return to animation again?
We’ll see. I’m driven by ideas and it just so happens that the idea for John Carter demanded this medium, but we’ll have to see what happens next. It’s never about my career; it’s about finding the best way to make the next movie.

What will inspire your next project?
I don’t know yet. Steve Jobs had a great saying that I firmly believe in: ‘It’s our job to know what people want before they do.’ That’s our goal. After 20 years in the business, I find myself going to go with my gut – but I don’t know what’s going to happen next for me.

John Carter is available on Blu-ray 3D, Blu-ray Hi-Def & DVD and you have the chance to win a Blu-ray Hi-Def + DVD Combo Pack. You can enter by adding a comment to this post on The Disney Blog’s Facebook timeline with your favorite moment from the film. We’ll draw a winner randomly from the entries on Friday June 8th at Noon EST. Must have a US shipping address to win. Not valid where prohibited by Law.