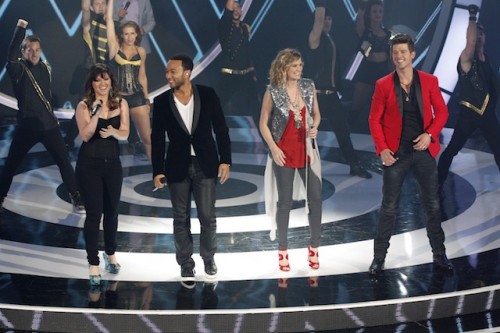 The television ratings juggernaut that is “American Idol” ends tonight. ABC is hoping its new music series, “Duets,” can capture some of that magic with a one-of-a-kind singing competition that kicks off on Thursday night. Hosted by Quddus (who?) and staring four of the music music industry’s biggest stars — Kelly Clarkson, John Legend, Jennifer Nettles and Robin Thicke – the show looks to fall somewhere between “The Voice” and idol..

Clarkson, Legend, Nettles and Thicke will set out on individual journeys across America looking for undiscovered talent worthy of being their duet partners, ultimately each choosing two singers as partners. Together Superstars and partners take the stage each week and perform in front of a live studio audience. In the end, only one duet will be at the top of the charts, and the winning partner will receive a recording contract with Hollywood Records.

I’ll admit I’m intrigued, although I’m not sure how the format will work. I like that Kelly Clarkson and John Legend are participating. That lends some credibility. Not so sure about the Dance Fever thing in the background of the photos. Will you be watching?

Duets premiers on ABC Thursday May 24th at 8PM ET/PT.

A video preview is below the jump:

And a bit with some of the contestants getting ready: