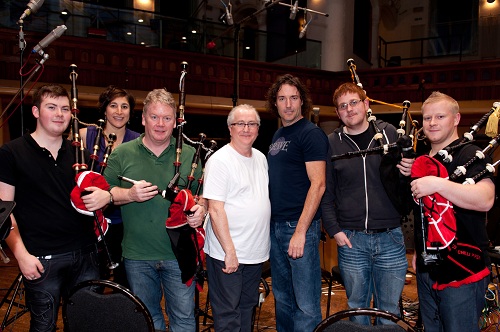 One of the reasons I’m looking forward to Pixar’s Brave is the promise of a musical soundtrack that evokes the rich tapestry of Gaelic culture. It sounds like I”m in luck. Patrick Doyle’s score promises authenticity with a fresh and contemporary approach to, as well as two original songs performed by lauded Scottish Gaelic singer Julie Fowlis. A third original song plays during the film’s epilogue and is performed by UK singing sensation Birdy with British folk rock band Mumford & Sons.

“The music of ‘Brave’ supports the story, bolstering this epic journey with Merida,” said Director Mark Andrews. “The music really sets the tone for the film and underscores the time period. We wanted to capture this ancient feel of Scotland and the music really adds another layer of authenticity.”

The “Brave” soundtrack will be available wherever music is sold on June 19, 2012 or you can pre-order it now on Amazon. The track list follows:

THE SCORE
Scottish-born Patrick Doyle, only the fourth composer to write a score for a Pixar film, used a variety of native Scottish instruments such as bagpipes, solo fiddle, Celtic harps, flutes and the bodhran. To give the score a contemporary and fresh feel he included original bespoke electronic sounds and electronically treated dulcimer and cimbalom. “I employed many classic Scottish dance rhythms such as reels, jigs and strathspeys, which not only serve the action but keep it authentic,” said Doyle. “I particularly loved composing the Gaelic lament ‘Noble Maiden Fair’ with my son Patrick Neil, sung so beautifully by Emma [Thompson] and Peigi [Barker].”

ORIGINAL SONGS
Two new songs performed by acclaimed Scottish Gaelic singer Julie Fowlis are among the film’s musical highlights. “Touch the Sky,” with music by Pixar’s own Alex Mandel and lyrics by Mandel and director Mark Andrews, accompanies Merida’s liberating and exhilarating ride through the forest when she is able to escape the confines of castle life. The song “Into the Open Air,” with music and lyrics by Mandel, is heard later in the film during a special moment between mother and daughter. “If ever we imagined a singing voice for Merida—the beauty, the clarity, the directness and honesty—Julie embodies that and she’s fantastic,” said producer Katherine Sarafian.

Added Fowlis, “It was great to be invited to record and perform on the soundtrack to ‘Brave’ and particularly to sing the songs which represent the feisty, female lead Merida. I so enjoyed the challenge of adding a dimension of acting to my singing in order to bring Merida’s character and inner feelings to life through song.”

“Learn Me Right” is an original song performed by Birdy, whose self-titled album has been awarded Gold and Platinum status in UK and Europe respectively, and the Grammy®-nominated British folk rock group Mumford & Sons, who also wrote, arranged and produced the track. “It’s quite fun doing a song for a movie rather than for an album,” said Marcus Mumford. “We liked the idea of having an orchestra in the background and having a girl like Birdy sing—it’s been quite liberating.” Added Birdy, “I love it because it tells a story. Although it has a lot of emotion, it’s also very upbeat and you want to dance to it, which is why it works so well.”

“‘Learn Me Right’ is an amazing song,” said Sarafian. “I feel something every time I hear it. Mumford & Sons sketched out a piece that would do justice to the culminating moment of the movie, underscoring the emotion, heart and the lessons learned between mother and daughter. They really found that moment of truth in the story we were trying to tell and it takes the movie to a new level at the end.”

Directed by Mark Andrews and Brenda Chapman, and produced by Katherine Sarafian, “Brave” hits theatres on June 22, 2012. The film’s soundtrack from Walt Disney Records will be available June 19, 2012.