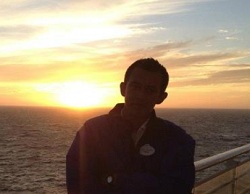 An iPhone owned by one Katy McCaffrey went missing when she was aboard the Disney Wonder. A few weeks later said phone started to auto publish photos of cast member life aboard the Disney Wonder. One cast member seems to be in possession of said iPhone and is easily identifiable by his nametag (along with the names of his fellow cast members and ship’s officers). Check out the photos, and amusing commentary, on a Facebook album that McCaffrey has made public and given permission to share.

The original owner is now in contact with Disney Cruise Lines asking about the whereabouts of her purloined iPhone and said cast member. Now, there may be a perfectly good explanation for all this, but evidence is pretty damning. The series of photos also casts DCL’s crew in a bad light by association alone.

The story has now been picked up by national news and shared over 560 times (as of the original publishing of this post). Time to start some damage control.