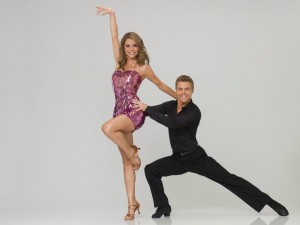 The results show began with an encore performance of William and Cheryl’s perfect scoring samba. Next, we saw that Katherine’s back was feeling much better as she jumped for joy upon hearing that she and Mark, this week’s low scorers, made it to the finals. The Macy’s Stars of Dance performance was the design-a-dance featuring a samba danced by Tristan and Chelsie.

After a performance by Alanis Morissette, Maria and Derek, this week’s leaders, learned they were in jeopardy. WHAT THE WHAT? “Rock of Ages” stars Julianne Hough, Mary J. Blige, and Diego Boneta rocked the ballroom with a medley of songs, and Carrie Underwood performed one of her new songs.

Tom revealed that William and Cheryl were safe, which left Donald and Peta in jeopardy. The ballroom erupted in boos when it was announced that Maria and Derek were leaving the competition. Perhaps less people voted for them since they seemed like a sure thing for the finals? Yikes. I thought they were going to win the whole thing!

Next week we’ll see the last three couples freestyle their hearts out as the quest for the mirrorball trophy comes to a close. Yay freestyle! See you back here!