How to Make the Matterhorn Disappear and Reappear the Disney Way 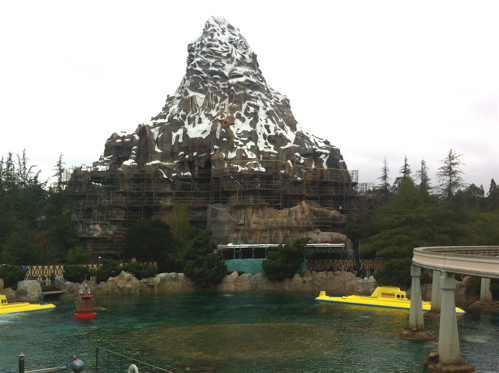 As Disneyland prepares to re-open the Matterhorn with new cars, new ‘snow’, and refurbished track on June 15th, hopefully all the hard work will pay off with thousands of smiles as a new generation of families get to experience the world famous attraction. But before they could begin the hard work of the upgrades, Disney had to erect a complex system of scaffolding to protect workers and guests down below.

Disney seldom lets a chance to document a moment like this pass by and they’ve made this terrific time-lapse video of the mountain disappearing behind a shroud and then reappearing again later when the work was done.

Originally 147 foot high (1/100th scale of the real mountain), the Matterhorn now only measures 144 feet after sinking slightly when the water from the Submarine Lagoon was emptied. (Just kidding!) It does, however, have a basketball half-court in the break room half-way up the mountain. What other fun facts about the Matterhorn do you know?