I’m of the opinion that Downtown Disney is under-utilized as an event space. The Festival of the Masters has a long running success and last year they tried adding a car show. That must have been a success too, because it’s back again this year, even without a freshly released ‘Cars’ movie from Pixar to tie it to (not to say they aren’t trying).

Car Masters Weekend is held at Downtown Disney June 2-3, 2012. It celebrates everything “Cars,” in a free, two-day event with a car show presented by Hess Express, plus meet and greets with Lightning McQueen, Mater and Finn McMissile.

In a race for ‘Best in Show,’ car enthusiasts from the local Muscle Car Network of Central Florida will display more than 100 classic, muscle and exotic cars for families and judges to view. Guests are invited to vote for their favorite car to win the People’s Choice and Kid’s Choice awards. 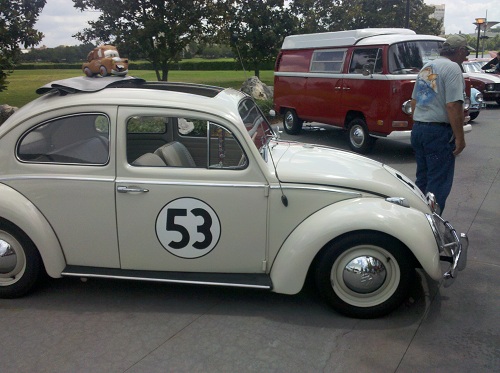 Revving up the fun, legendary automotive designer Chip Foose will be making special appearances as one of the car show’s guest judges. Foose, who contributed to the design of Ramone in the Disney•Pixar ”Cars” film, also will be on-hand for a signing of his Cars-inspired images, including Doc Hudson, Lightning McQueen, Flo, Ramone and Mater.

Returning events will include a chance for guests to put the pedal to the metal with Ridemakerz model cars; Disney face painters & tattoo artists; a DJ and several local food trucks. General Motors also will have their latest Chevrolet models on display, including the Corvette Grand Sport, Camaro Convertible and the Volt.

Do yourself a favor and head down for some fun to Downtown Disney West Side from 9:30 a.m. to 7 p.m. each day. For more information, visit disneyworld.com/downtowndisney.

previousHow to Make the Matterhorn Disappear and Reappear the Disney Way
nextThree Years Later: A Look at Disney’s Acquisition of Marvel