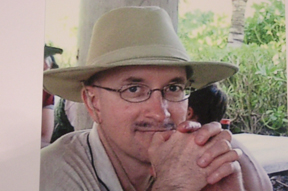 If you’ve been to the Disneyland Resort, Walt Disney World, or even on a Disney Cruise, chances are you’ve seen people walking around with a bright yellow book and a tendency to periodically stop and stare at rather obscure signs, windows, and random bits of architecture. Those folks are hunting Hidden Mickeys. Be very, very quiet.

The book in question is by Steven M. Barrett, and is part of his popular series titled Hidden Mickeys: A Field Guide to (insert Disney location here)’s Best Kept Secrets. There’s also an app for that!

Each book offers a number of Hidden Mickeys for Disney guests to search for on their visit. What is a Hidden Mickey? “A partial or complete image of Mickey Mouse that has been hidden by Disney’s Imagineers and artists in the designs of Disney attractions, hotels, restaurants, and other areas. These images are designed to blend into their surroundings. Sharp-eyed visitors have the fun of finding them.” — from Hidden Mickeys: A Field Guide to Disneyland Resort’s Best Kept Secrets, Chapter 1 “Hidden Mickey Mania”

Barrett has been canvasing Disney parks (and ships) to track the elusive Hidden Mickeys for over 20 years. He’s found a few.

I recently had the pleasure of speaking with Mr. Barrett via Skype about his books, the website that they have spawned (HiddenMickeyGuy.com), and life as America’s most-celebrated Hidden Mickey hunter.

WH: At what point did you realize that Hidden Mickeys were your thing?

SMB: I was in Orlando in 1989 for a conference and in doing some travel research I read a book on Disney World [note — it was Barrett’s first visit to Walt Disney World] and then I just fell in love with it. I kept visiting WDW, and then I finally moved to Orlando.

I had written a [non-Disney] guide book and my publisher asked me if I had any ideas about Disney material. In the early 90s I had started collecting Hidden Mickeys so I created the scavenger hunt for efficiency.

WH: How did your friends and family take your passion for Hidden Mickeys?

SMB: My family is very supportive. My son lost interest in his late teens, but now that he’s in his twenties he has regained it.

WH: How often do you visit the parks?

SMB: I visit WDW about once a week. I try to get to Disneyland about two or three times per year.

WH: Do you find each Hidden Mickey yourself?

SMB: People contact me, they submit Hidden Mickeys to the website, and they need to be verified. Unfortunately, some people have tried to fake me out, so I need to go myself or have someone I know verify the Hidden Mickey.

WH: Are the parks still magical and fun?

WH: Do cast members know you and help out?

SMB: They weren’t really allowed to talk about them when I started. It was kind of “under the table” material.  There are over 65,000 CMs, and some are very helpful. They see me coming and can’t wait to show me a new Hidden Mickey. I’ve even had Disney artists write me with stories about Hidden Mickeys they have created.

WH: Do you find yourself interacting with fans in the parks?

SMB: I love seeing people in the park using my book. I’ll approach them, sign their copy, and help them look. Sometimes I have to show them my picture in the book to prove that I’m really me.  It’s funny, a lot of people think it’s a kid’s game, but there are a lot of adults. Kids are involved, but the adult community is huge.

WH: I heard something about Hidden Minnies. Is she hiding in the parks, too?

SMB: They started hiding Mickeys in the 80s, at Epcot, and some Hidden Minnies followed in the 90s.

WH: Who decides to put in a Hidden Mickey?

SMB: Basically, someone says, “Why don’t you put a Hidden Mickey in this area!” and often they let the artist run with it. One great story, after the hurricane in 2004 there was damage to the mural in Conservation Station at Animal Kingdom and artists came in to fix it. One evening the night janitor came up to an artist and said, “Sir, you forgot the Hidden Mickeys.”

WH: What’s next for you and Hidden Mickeys?

SMB: I work on the website daily [his wife, Vicki, helps to run the website], update the books every other year, and I’m in a constant state of verifying hidden mickeys. This year we will travel on two Disney Cruises.  It’s about enjoying the journey, not just the destination.

You can purchase copies of the Hidden Mickeys books on the official website, and you can find eBook versions at Amazon, Barnes and Noble, or your favorite eBook provider.

previousJohnny Depp on his ideas behind Tonto from The Lone Ranger
nextWalt Disney Studios – The Worst Disney Park in the World?