Walt Disney Studios – The Worst Disney Park in the World? 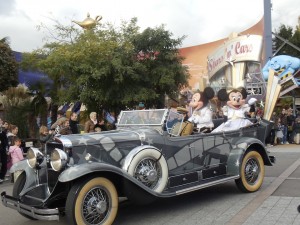 Ever since Walt Disney Studios opened at Disneyland Paris in 2002, it has faced a lot of criticism. Many fans have even referred to it as Disney’s “worst park.” ThemeParkInsider.com, a blog that frequently hates on Walt Disney Studios, published an article called “10 Reasons to Love The Walt Disney Studios” but described it as “not an easy list to compile.”

I personally haven’t been to every single Disney Park in the world (I’ve still yet to visit the company’s Asian properties) but I wanted to provide my thoughts on this debate. I’ve visited Disneyland Paris four times in the past two years, as I’ve attended grad school in London. (For reference, I’ve been to WDW 10+ times and Disneyland just a few times in my life.)

The reason I’m writing this now is I stumbled across a thread in WDWMagic titled “why so much hate for [Disney’s] Hollywood Studios?” As I read each critique of the park, I considered whether the same could be said for its Paris counterpart. For the most part, yes. Here are the major criticisms I’ve heard throughout the years on DHS and their WDS equivalents:

DHS is a “half-day” park

Walt Disney Studios sometimes barely even qualifies as a half-day park. For example, I was in the park last week, and I happened to be walking in front of a family of four. It was only a couple hours after the park opening, and the dad couldn’t stop talking about how excited he was to be leaving – he was so happy that they “got everything done” so quickly and “could spend the rest of the day in Disneyland Park.” This family of four had done EVERYTHING they wanted to do in just over two hours, and they were ready to leave.

Going off that same family of four, they had two children about ages seven and nine, I’d guess. Possibly too short/afraid to ride the park’s thrill rides (Rock ‘n’ Roller Coaster and Tower of Terror) and probably too old to enjoy the park’s younger offerings like Playhouse Disney. This doesn’t leave much, other than Crush’s Coaster (which suffers from the same problems as TSMM in Florida – it’s one of the only family-friendly rides for all ages, so the line is pretty much always much longer than any other attraction.) As a side-note, Crush’s Coaster ranks among my top 3 attractions in ANY Disney park. It’s truly one of WDS’s strong points.

Neither does Walt Disney Studios – hands down.

DHS is losing its cohesive theme

This is perhaps where Walt Disney Studios fares better than its Florida counterpart. The themed areas seemed more tied together (especially the neighboring Toon Studio and Toy Story Playland areas.) Plus, Walt Disney Studios doesn’t have the frequently-criticized Sorcerer’s Hat, and has retained the Earful Tower as its icon. (Although I admit it, I do like the Sorcerer’s Hat.)

But overall, even with the above remarks, Walt Disney Studios is still a fantastic park (and so is Disney’s Hollywood Studios.) Disney sets the bar in terms of theming and attractions, so really they are just competing against themselves. So yes, Walt Disney Studios could be considered the worst, but being the worst of the best isn’t a terrible rank to hold.

Additionally, I think the construction of the expansive and expensive Ratatouille dark ride will give the park a lot more of what it needs, at least alleviating some of the park’s downsides.

For those of you who have been to Disneyland Paris, would you consider Walt Disney Studios the worst Disney park in the world?