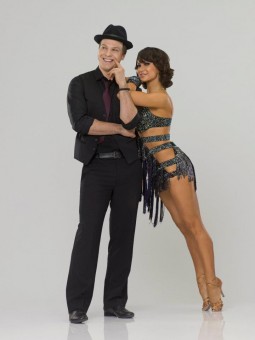 The results show began with Maria and Derek giving an encore performance of their hot salsa. The first three couples called to the stage are Maria and Derek, Melissa and Maks, and Gladys and Tristan. And they all find out that they are safe!

Train performed live, followed by a Macy’s Stars of Dance performance celebrating Latin music featuring Sheila E. Then Selena Gomez and the Scene took the stage to keep the ballroom rocking. William and Cheryl, Katherine and Mark, and Donald and Peta were all relieved to learn that they avoided the bottom two.

Roshon and Chelsie were declared safe, which left Jaleel and Kym and Gavin and Karina in the bottom two AND in the dance duel. The whole idea of the dance duel makes me nauseous. This new feature involves the bottom two couples dancing for the judges at the same time to save their place in the competition. Oy, the stress. The two couples danced the cha cha for the judges. While both pairs performed admirably, the judges decided to save Jaleel and Kym, sending Gavin and Karina home.

Tonight’s elimination wasn’t much of a surprise. Next week is a Motown special. What will be in store for the ballroom then? See you back here!