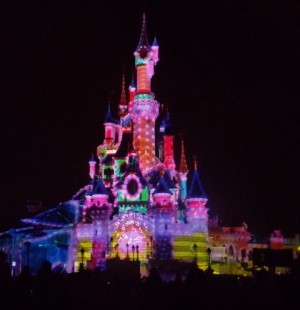 I know it’s a little late, being almost three weeks since Disney Dreams! premiered at Disneyland Paris – but life got in my way of seeing it on opening night, so I had to wait until now. Anyway, here is my review of Disneyland Paris’s new nighttime spectacular, Disney Dreams! (If you want a shorter, more generic review, take a look at my full trip report from two days in Disneyland Paris.)

(If you haven’t yet seen a YouTube video, here is a link. But if you’re at all like me, you’re completely avoiding a video until you can see it yourself in person.)

The premise is basically like any other Disney show, except the main character is swapped – Peter Pan replaces Mickey Mouse. Peter Pan’s shadow gets away from him and experiences a sequence of magical dreams, complete with villains and romantic scenes. (Spoiler alert: everything turns out alright in the end.)

To give an overview, this show mixes elements of Magic Memories and You, Fantasmic, World of Color, and Wishes. That being said, for anyone expecting something on the same level of quality of these four shows, you might be disappointed. This show is not intended for American audiences. However, it feels right at home in Paris. I’ve never seen any of Paris’s previous nighttime offerings (other than on YouTube) but this is the best they’ve offered.

Delving a little deeper, I was particularly impressed by the Mary Poppins (although short) and Tangled sequences. This makes complete sense, given that Tangled is the newest Walt Disney Animated Studios feature (so they’d want to capitalize on it) and Mary Poppins resonates with Disneyland Paris’s British visitors. (Featured segments also include Peter Pan, Hunchbank of Notre Dame, Ratatoullie, and Beauty and the Beast – catch the trend?)

The only criticism I have (I have to offer one, right?) is that the Hunchback of Notre Dame animation seemed quite crude compared to everything else – it was almost as if expert animators had drawn the rest of the segments, and Quasimodo had been left to interns. (But really, with this comment I’m *digging* for something to criticize.)

Overall, if I wasn’t spoiled by YouTube videos of The Magic, Memories and you, and seeing World of Color in person (which I think is BEAUTIFUL) I would have been awestruck. And the audience around me seemed just that. It truly is a beautiful offering. However, it’s not up to par with Disney’s American offerings. (This isn’t a negative, though – Disney clearly has a higher quality in the states than they do in Paris. I’ve visited Disneyland Paris several times, and always felt that it was fantastic, but just a step below its American counterparts. But I must say, this is justifiable as a business decision.)

All in all, Disney Dreams is wonderful. If it were a replacement for any Walt Disney World show, I might not be giving such a glowing review, but I truly did love every moment.

(To read more, check out my trip report from my two day visit to Disneyland Paris, complete with even more opinions and pictures!)

5 thoughts on “Disney Dreams! – A Review”