Are you the type of person who loves to eat pie and, if given the chance, would keep going back for more? Then you won’t want to miss the American Pie Council National Pie Championships at the Caribe Royal April 27-29. In addition to the pie championship, the event includes a two day Great American Pie Festival in nearby Celebration, FL the highlight of which is a Never Ending Pie Buffet April 28-29.

I went last year and it truly was amazing. Crowds were thick, but the atmosphere was fun as an astounding 87,000 slices of pie were served by America’s best known commercial bakers. Tickets for the Pie Buffet are $10 for adults and $5 for seniors over 65 and children under 5 to enjoy all they care of eat and drink. But the rest of the pie festival is free. Last year they had a car show and some amazing gourmet food booths set up. My advice is to show up early and avoid the hottest part of the day. 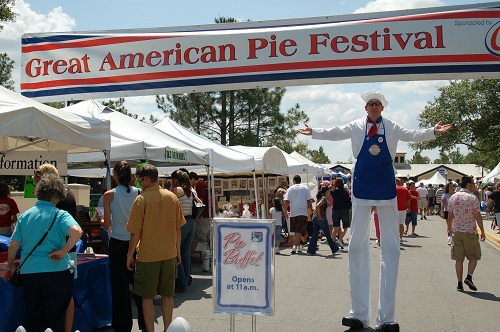 I have again been offered the chance to give away a family four pack of tickets to the Never Ending Pie Buffet. Please only enter this contest if you’re locals or know you’ll be in town on April 28th or 29th. To enter leave a comment with a valid email and your favorite flavor of pie on this post. One entry per household please. Deadline is Tuesday April 3rd at 5pm EST. Good luck.

Bakers of all Skill Levels, Judges and Pie Lovers From Around the World to Converge in Central Florida Again this April to Celebrate the Infinite Ahhh-someness of PIE

The countdown is on for the American Pie Council® (APC) — America’s only organization dedicated to preserving America’s love affair with pie — as it gears up for its 18th Annual APC/Crisco® National Pie Championships to be held Friday, April 27 through Sunday, April 29 at the Caribe Royal All-Suite Hotel and Convention Center in Orlando and its 11th Annual APC Great American Pie Festival sponsored by Crisco® on Saturday and Sunday, April 28-29, in nearby Celebration, Fla.

The APC is now accepting entries from amateur, professional and commercial bakers, as well as budding junior chefs, for the National Pie Championships. Last year, the prestigious pastry bake-off drew more than 447 commercial, 142 professional, 301 amateur and 6 junior entries for an astounding total of 896 pies in the quest to find America’s top bakers. Commercial winners took home bragging rights and the promise of greater sales, while winners in all other categories received plenty of dough, as is cash and prizes, including a Sears Kenmore range. This year’s competition is expected to be even more heated. Entry forms and pie categories for each division are available on the APC website, www.piecouncil.org. Entry is free for junior chefs and $15 per pie for amateur APC members, $35/non members and each entrant receives an Emile Henry pie dish; see website for professional and commercial entry costs. APC members receive discounted entry costs; membership information is also available online.

Pie lovers are also invited to apply to be a judge at the prestigious competition. Last year, 174 esteemed pie aficionados from all over the world lent their time and taste buds to nibble on nearly 900 pies. No previous judging or baking experience is required; applicants need only explain why they would like to be a judge. Potential pie judges may fill out an entry form online at www.piecouncil.org through March 30, 2012.

Hundreds of volunteers are also needed to make the championships and the APC Great American Pie Festival sponsored by Crisco® run as easy as, well, pie. Volunteers may indicate the shifts or duties they prefer to work by filling out an application online at www.piecouncil.org by Tuesday, April 24, 2012.

The Caribe Royal is offering a special rate of $129 per night for those competing in or attending the APC/Crisco® National Pie Championships or the APC Great American Pie Festival sponsored by Crisco®. To receive this special rate, guests must mention the event by name. Reservations may be made by calling 800-823-8300. For more information about the Caribe Royal, visit www.thecaribeorlando.com.

“Preparations are heating up at the American Pie Council for this year’s championship and festival. Right now, all around the country, bakers of all skill levels are putting the finishing touches on their best recipes,” said Linda Hoskins, Executive Director, American Pie Council. “Each year tops the last in terms of creativity, enthusiasm and dedication to the art of pie baking. We absolutely cannot wait to see what this year’s festivities will bring.”

More than 32,000 pie lovers from across the globe are expected to transcend upon Celebration, Fla. on Saturday, April 28 and Sunday, April 29 for the APC Great American Pie Festival sponsored by Crisco®. The increasingly popular, free admission festival returns to Celebration with all the activities that have made it a family favorite, including the Crisco® Creation Station, the pie tinart activity for art lovers of all ages, and the Demonstration Stage sponsored by Village Inn and Bakers Square Restaurants, featuring entertainment and baking demonstrations with chefs from across the country. Always a crowd favorite, the kids’ and adults’ pie eating contests return this year, once again sponsored by Private Selection. Meanwhile, the Book Nook will expand this year to feature even more choices by pie authors, many of whom will be competing in the championships, including Michele Stuart of Michele’s Pies in Norwalk, Conn., who recently released her cookbook, “Perfect Pies: The Best Sweet and Savory Recipes from America’s Pie-Baking Champion.” All festival events will be held both days.

The highlight of the festival is the Never Ending Pie Buffet, which last year featured an astounding 87,000 slices of pie as well as ice cream, toppings and beverages from America’s best known commercial bakers. The Never Ending Pie Buffet has grown each year, from 83,000 slices in 2010 and 70,000 in 2009. The buffet and the children’s activities are the only paid events at the festival. All stage entertainment and demonstrations are free. Tickets are the Pie Buffet are $10 for adults and $5 for seniors over 65 and children under 5 to enjoy all they care of eat and drink.