While aboard the Disney Fantasy preview cruise I sat down for an exclusive, but confidential, dinner with three Imagineers who were set to embark in their next big project for Disney Cruise Line the minute we put into port. In order to help conceal their identities, I agreed not to post details of the dinner until today.

With the success of the Dream and Fantasy, the company sat and looked at its compliment of four ships and the number of destinations that could be served at any one time and found that no matter how they sliced it, there were really five year round markets, East Coast has the Caribbean & Bahamas (2 markets), There’s the Western Caribbean and Mexico (1 market), and then there’s northern US combined with Mediterranean (1 market). But the fifth untapped market is South East Asia.

Serving Australia, New Zealand & Malaysia, Disney’s fifth ship in the Disney Cruise Line fleet will not only bring Disney to this under-served market, but will bring a floating theme park as well. Based on an old Imagineering concept code named SS Disney, the fifth ship will be the largest Disney ship yet. It will hold over 6000 passengers and crew. Plus the top 4 decks will be dedicated to attractions and theme park rides as only Disney can conceive of them. 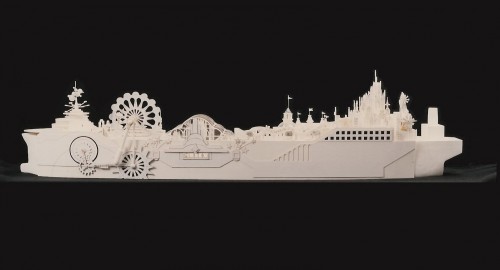 “This new ship will really blow all the others out of the water,” said one Imagineer. “We made the Aquaduck work on the Dream and Fantasy, now we’re moving onto Pirates of the Caribbean on the Caribbean.”

As even the largest existing facility for cruise ships is too small to handle the construction of the fifth ship in the fleet, the construction is being done in parts and assembled in a port normally reserved for super tankers. Contractors who believe they’re working on attractions for Shanghai Disneyland are actually building parts for this new ship. Even furniture builders and fabric fabricators have been told the nautical themed products are for a ‘themed’ hotel being planned for Disneyland in California.

“We’re keeping a tight lid on this project,” said one of the Imagineers. “Tighter than even the AVATAR technology. We have to because of our partnership with the Soviet Space Simulation Academy. Our joint project “AVATAR Project Research Institute Level One” is not even located in Glendale. Instead we’re housed in an abandoned warehouse on Disney Institute facility.”

The imagineers showed me a few more pieces of concept art on their iPad and I have to say I’m impressed. It’s just what Disney Cruise Line needs to take it into the future and set a new high bar for all cruise lines.