Update: In discussing this with someone involved with SotMK, the real restriction is that you can no longer advance beyond the level you are playing. So if you are currently working Medium or Hard levels, you can continue to play that, but once you’re done, you’ll be taken back to Easy. Anyone currently in Easy or Medium can’t advance while the restrictions are on. I’m not sure how this will impact the line length at the portals, but it should help, just not as much as we thought before. 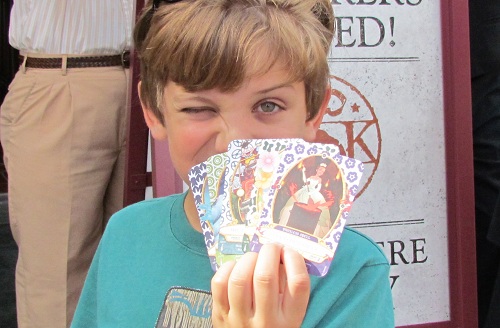 I’d be lying if I didn’t say I spotted this one a mile away. With only four lands to play in and growing popularity among locals and cast members, Disney’s card based interactive game Sorcerers of the Magic Kingdom was sure to reach its capacity quite often during busy days. What I didn’t take into account was that the harder levels of the game take even longer to play than the entry level. This appears to have compounded the wait time to play at each station, significantly reducing capacity, and resulted in park officials making an interesting decision.

Touring Plans is reporting that guests are currently only able to play on the ‘easy’ level of SotMK. The easy level only requires one card to defeat each villain. Guests who have achieved a higher level will only be able to play the easy level while the restriction is in place, but should be able to resume their medium or hard level games in the future.

While it hasn’t been officially announced, it is believed that new SotMK play stations will be coming online when the New Fantasyland area opens completely. There is also a possibility that they could do something in Tomorrowland or even in the monorail resort hotels (think of the enchanted art aboard the Disney Dream and Fantasy). Also, just adding one more station to each land would make a difference.

I love the game for a lot of reasons. My son loves to play it and I like to watch and help him. The cards are beautiful, free and collectible, which satisfies one of my Disney habits for a very low cost. Also, there is the element of strategy and discovery involved in the game. It adds a new layer to the theme park experience with the ability to provide a different magic encounter each time. With generations of kids growing up with a screen as their preferred method of interaction, games like SotMK will continue to grow and add layers of fun to Disney’s theme parks and I can’t wait to experience them.

The question for today is, what else could Disney do to make Sorcerers of the Magic Kingdom a better guest experience today?