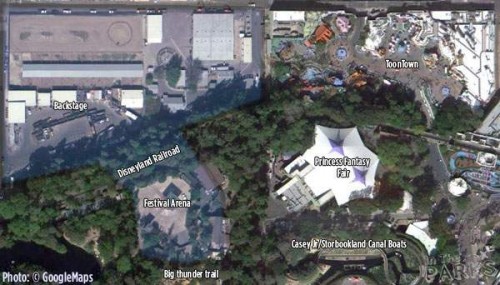 After the rumors are swirling that the proposed Avatar land at Disney’s Animal Kingdom is on hold, it should come as no surprise that fans are speculating on what will be the next big project for Imagineers. MiceChat has surfaced the prospect of a Wizard of Oz themed land that could be in development for Disneyland. The word is that if Disney’s upcoming film “Oz The Great and Powerful” is a financial success that the area will be given a green light. This will seamlessly bring together the area between two nearby lands with the transition from Kansas to Oz mirroring the transition from Frontierland to Fantasyland (see the above picture to get a sense of where this would go.)

But Avatar and Wizard of Oz are not the only franchises that are getting the speculation treatment. DisneyGossip is claiming that plans are in the works for a Wall-E ride at Disneyland and Magic Kingdom, and also hints at another E-ticket ride for Tomorrowland that “we’ve already heard of.” (Probably Troncoaster.)

Is there anything to these rumors? Only time will tell. From this fan’s perspective, I’d love to see any addition that brings new attractions. However, many other fans are outraged that Disney would even consider adding attractions based on franchies outside of the Disney vault. They claim that a completely immersive experience that allows fans to walk through the enchanted forests of Pandora or step foot on the yellow brick road is not what Walt would have wanted.

But consider this…there are other franchies out there that Disney at least has the sense to ignore. What would happen if a Twilight ride were introduced in Disney’s Animal Kingdom? Or an interactive experience added to Disney’s Hollywood Studios based on The Hunger Games? (Yes, some fans have even suggested this.)

So where do these rumors come from? Let me tell you.

5 thoughts on “Avatar, Wizard of Oz, The Hunger Games in Walt Disney World?”