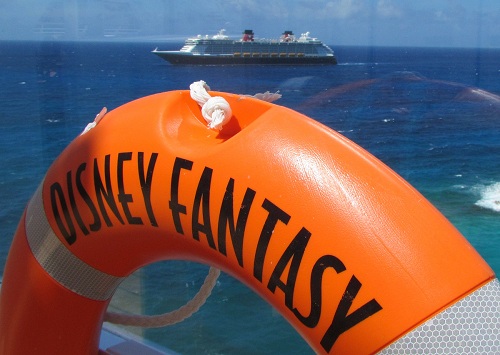 Toward the top of the list of the highlights of my trip on the Disney Fantasy preview cruise, and there were many, were the three close encounters the Fantasy had with its sister ship in the Disney Cruise Line fleet, The Disney Dream. All three encounters included the two ships talking to each other via the ship horn, but the visit between the two ships at Castaway Cay was the closest and loudest.

The Fantasy was docked at Castaway Cay and the Dream made a special trip just to come show off. After the horn battle the Dream pivoted in the water just a couple hundred yards off the bow of the Fantasy and then took off back to its next destination. Many crew members on the Fantasy had either worked on the Dream or have friends there, so there was a special feeling on deck with cast members and guests all enjoying the show together.

Coming soon, two videos of the fireworks aboard the Disney Dream as seen from the Disney Fantasy – the very first time ever for that and quite possible the only time for the foreseeable future.