Dust Off Your Sequins! Dancing With the Stars Season 14 Premiere Recap 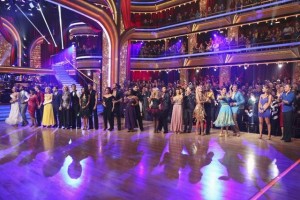 Hi guys! I dragged my spray tanner out of storage to celebrate our return to the ballroom. What a high-scoring first night! Noticeably absent were any paddles lower than 6, which is very unusual for the initial week of competition.

Two couples tied at 26, for the highest score of the evening. Katherine Jenkins, a classical singer, and Mark Ballas earned marks of 9, 8, 9 for their elegant foxtrot. Carrie Ann remarked that it was like watching two pros. Jaleel White (can I just call him Urkel?) and Kym Johnson were also awarded 9, 8, 9 for their foxtrot, which Carrie Ann called the show’s icing on the cake.

Latin heartthrob William Levy and Cheryl Burke fired up the ballroom with a hot cha cha. Bruno proclaimed that William is the hottest package of the season, and also kindly pointed out that he was overdressed. Bruno, I concur. Triple 8s gave them a total of 24.

Four couples earned a score of 23 (8, 7, 8) in their dances. Jack Wagner and Anna Trebunskaya performed a fun springtime-inspired foxtrot. I must pause to say that I loved Jack Wagner on “Melrose Place.” Ah…the 90s. Disney star Roshon Fegan and Chelsie Hightower rocked the ballroom with their cha cha. Len, of course, thought the routine was a little heavy on the hip hop. Sherri Shepherd lit up the room with her exuberance. She partnered with Val Chmerkovskiy to have fun with the foxtrot. Sherri cracked everyone up by remarking that she left a boob on the dance floor. Music legend Gladys Knight and Tristan MacManus pleased the crowd and the judges with their cha cha.

Maria Menounos is the lucky star partnered with Derek Hough this season. She kicked off the night with a cha cha, and was awarded triple 7s (total 21) from the judges. I’m still not sure if her quirky laugh made me giggle or gave me nightmares. NFL receiver Donald Driver continued the show’s long tradition of professional athletes tearing up the ballroom floor. The audience was thrilled by his HOT cha cha with Peta Murgatroyd, but disappointed that the judges only gave them triple 7s (total 21).

Three couples rounded out the leader board with a total score of 20 (7, 6, 7), which is pretty incredible for week one! Musician Gavin DeGraw danced the fox trot with Karina Smirnoff. It was gentle and sweet, but a tad underwhelming. Melissa Gilbert and Maks Chmerkovskiy…I’m sorry, hold on a second…OMG LAURA INGALLS! I have seen every single episode of “Little House on the Prairie.” Several times. I even have a photo of myself (which I will not be sharing) with my hair braided just like Laura. Anyway, , Melissa danced a challenging cha cha routine, which Carrie Ann said showed her potential. Martina Navratilova and sweetheart Tony Dovolani performed a foxtrot. Martina did a commendable job, despite the fact that she’s unaccustomed to wearing heels and dresses.

It was an impressive night of debuts in the ballroom. There is no elimination show this week, so I’ll see you back here after next Monday’s performance show. Keep dancing!

6 thoughts on “Dust Off Your Sequins! Dancing With the Stars Season 14 Premiere Recap”

previousThe Barnstormer Featuring Goofy as The Great Goofini
nextCastle 4-18: A Dance with Death