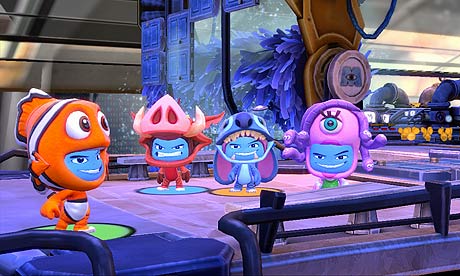 A screenshot from Disney Universe

One of the areas that has always been a weakness here on The Disney Blog is Disney’s gaming efforts. That’s largely because I’m not really a video game player. I tend to start one game and focus on it to the exclusion of all else in my life until I’ve conquered it. Needless to say that’s not a very healthy habit, so I only allow myself to game in small doses. So I was happy to find an excellent report on the state of gaming at The Walt Disney Company to help bring me up to speed.

It looks at social games, core games, mobile games, and my favorite MMOs:

The one thing about Disney’s MMOs, excluding ToonTown and Club Penguin, is that they are not very popular. The main reason behind this is most likely the fact that ToonTown and ClubPenguin are highly marketed on the Disney Channel and are continually updated with new content. Disney needs to learn how to make MMOs with compelling reasons to upgrade to paid membership. I tried playing Pirates of the Caribbean Online, and maybe I am alone in this, but I found that the game was hollow, both in terms of players, but also in terms of story and gameplay. Then I got hit with a brick, realizing I pretty much had to upgrade to continue playing, but felt no compelling reason to upgrade.

The article also gives some consideration to a few other Disney divisions, but the lion share is spent on gaming. Read the who thing at In The Life of a Nerd blog.