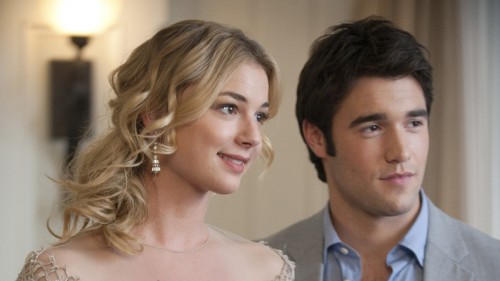 Ahhh. The engagement period. Otherwise known as “the happiest time of your life.” On the surface, Emily and Daniel might seem happy. Happy enough to give in to Victoria’s whims: a “fire & ice” themed engagement party (who thought that was a good idea?) and the posed family (?) engagement shots in the Grayson mansion. The ones where they are all wearing white. (Eh.) Emily has to be distracted with bigger matters if she is letting this atrocities occur.

In all honesty, this episode remained pretty sluggish through most of the hour until the last ten minutes when the you-know-what hit the fan. But before we get there… Emily is very focused on Charlotte finding out about who her father is. Without caring that Charlotte might feel like she was kicked in the gut, or on the verge of a massive identity crisis. Nolan tries to explain this to Emily, make her understand the possible consequences of what she is about to do. But no dice. Emily is in her zone. 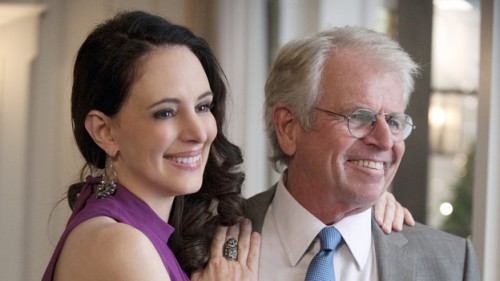 Meanwhile, Jack is topless. But sadly, still depressed and confused over Amanda’s sudden departure. Being the good friend he is, Nolan buys Jack a huge flatscreen. Because the only cure for heartbreak is porn. Clearly. As if things can’t get worse, his invitation to Daniel and Emily’s engagement party arrives and he tries to throw it in the garbage. But his aim is crappy because of his injury. So he has to bend over, and miraculously spots the tape left under his bed from the episode before. TV magic at its best, folks. Jack starts to lose it more, and we are witness to him leaving Amanda some very pathetic voicemails. He wants answers. He wants to know about this tape. He wants to know what happened.

In Grayson land, we get to meet Gramps, Conrad’s dad, who apparently has a sweet spot for Victoria and is very protective of the business he built without a high school or college degree. Victoria knows exactly what she is doing when she invites him to the Hamptons. The last thing Gramps wants is a messy divorce in the public eye so he may be the only one who could control the impending disaster of a situation.

Amanda is back on our screen, as she calls Jack asking for the tape. Instead of Paris, Emily has put her up in a hotel in Riverhead, Long Island. Poor Amanda. Well, kind of. She really likes Jack and doesn’t want to lie to him. “Does he miss me?” She asks Emily, who keeps trying to convince her she is actually protecting Jack. For all of us who thought Jack was like this super sweet guy who never loses his cool… it’s not true. When he finally makes it inside Amanda’s room, he demands to know why she came back. Was it for him? Was it for something else? Amanda is shaken up. “The truth is, I made mistakes and pretended to be someone I’m not. That littler girl you loved is not me.” (This is probably the truest thing Amanda has said the whole time we’ve know her.)

Jack refuses to give her back the tape. “I want to see what was worth throwing everything we had together away.” Amanda doesn’t want to play this game and tells Emily if she wants the tape so bad she has to get it back from Jack herself.

Despite more warnings from Nolan not to ruin Charlotte’s life, Emily goes ahead with mailing the tape of David Clarke admitting that Victoria and he had a child. Due to arrive during a big family dinner complete with Declan and Gramps. Simultaneously, Nolan is able to play the tape for Jack which features a young Amanda pleading with Mr. Treadwell to find Victoria. “They kissed on the lips so many times!” Surely she will be able to help her and her father. This is where the show got good. Literally, at 10:50.

But not before Emily catches a moment between Conrad and Charlotte, which actually pulled at my heart strings. Conrad apologizes to Charlotte about how dismissive he has been toward her. “I want you to be able to handle whatever instabilities that come your way.” She quickly answers she can handle them as long as she has Conrad. This is the first (maybe only) moment I have felt bad for Conrad. He really does love Charlotte so much without it having to be tied to a business deal. (Or so I think for the moment.) It’s pure. Emily finds the destructive tape before anyone else does.

Then Jack bursts into the dinner. Looking crazy. Asking all the forbidden questions. Why did you run Amanda out of town if you were in love with her father? How could she just leave her in the house as a helpless little girl? Victoria is trying to salvage the blow-up but it’s near impossible. Because Daniel is going on about how David raped his mother. And then the big admission – Charlotte begs to know what is going on and Conrad tells her: David Clarke is your dad. Then the big blow hits his guests. Victoria and David were engaged in a long, passionate love affair. And that ends another lovely dinner at the Graysons.

Emily didn’t have to do a thing to wreck this one. I can’t say I like the smirk on her face either.

Gramps won’t stand for all of this drama. And it has nothing to do with Conrad’s sad role as father and husband. The CEO of Grayson Global should not act in this manner. Daniel is the only sane, capable one in this household who is willing to stand up for what is right in their family. Gramps wants Conrad to step down from his post. Victoria overhears the whole conversation.

And the biggest catastrophe of all? Emily returns home to find her secret hideaway in the floorboards – the one that contains the key to her revenge – gone with an RSVP to the engagement party signed by Emily Thorne in red.

Two more things I should mention:

Next week brings us back to the opening scene of Episode 1. Who is dead on the beach? Is it Daniel? Will we find out who kills him? And where does the story go from there? Only time will tell. Hope you have your finest red frocks ready! Until next week…