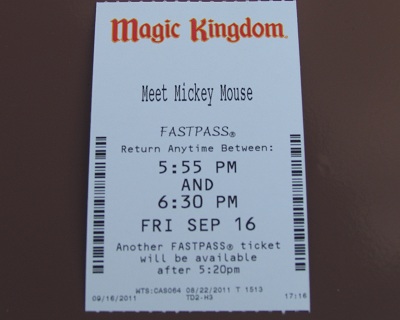 Let me start with a full disclosure. I would be perfectly happy if FastPass went away tomorrow. On the whole I think it is a bad thing for the parks. Here’s a short list of FastPass’ problems as I see it: it artificially inflates wait time for rides with high-throughput, creates unhappy guests, and crowds the open spaces of the parks effectively lowering park capacity. It never really drove in-store sales and increased dining revenue the way it was originally intended too either.

What FastPass does do is effectively create an elite class of theme park attendees. Those who know how to maximize their day in the park by efficiently using FastPass have a very different experience in the parks than those who wait in every standby queue. Keep this point in mind. We’ll be coming back to it.

Disney discovered one of the unexpected benefits to FastPass is that it helps Disney forecast staffing levels for the rides. By doling out only a certain amount of Fastpasses early in the day, it doesn’t have to operate the rides at full capacity until later.

This process, along with other labor management techniques, is used to make sure each park is meeting its ‘guest satisfaction’ goal of 8 or 9 rides per day for each guest. Not enough guests hitting that number? Then add some capacity or dole out more fastpasses. Too many guests riding more than 9 rides? Disney can safely cut back on labor hours. Since labor is one of the largest daily costs for the parks, this sort of optimization has helped Disney really milk profits out of the park, like the 17% increase in profits Disney’s parks experienced in 2011.

Disney also uses the ride per capita number to justify capital expenditures. New attractions means the hotels have to up their capacity to accommodate the increase attendance they expert. Restaurants have to be opened, roads paved, busses added, new cast members hired and trained, etc. You can see how it all adds up.

As you may have heard, Disney is getting ready to change Fastpass again. Cast Members have been told that on March 7th, they are to start restricting return times to the period listed on front of the Fastpass. Since Fastpass was rolled out, that window was always a minimum. You had to wait that long, but the disclaimer on the back made it clear that it was just a guideline they were asking you to ‘please’ adhere to.

There are many reasons it was always a guideline, never a hard and fast rule. For instance, Cast Members are trained never to directly say no to a guest. Instead they have to come up with a polite way to get the guest to follow the rules. “Please come back at your return time” is not a ‘no’ since the guest will still get to ride the attraction. But “I’m sorry you missed your appointment” is a ‘no’ since then the guest does not get to ride the attraction. Since a guest can get delayed in many ways that are out of their control, have kids that need a mid-day nap, just fail to read the fine print, or any other of excuses, having to say no was seen as not meeting the standards of total guest satisfaction. Plus why would Disney want to put front line cast members in that position anyway.

Now Disney has determined that there are sufficient business needs for guest satisfaction to take a hit, with the hope that it will be replaced by other forms of satisfaction. The immediate result of this should be more Fast Passes issued. Like airplanes that overbook, Disney can count on a certain percentage of guests to just not show up for that ride. More guests enjoying the benefits of Fast Pass should be good for guest satisfaction and for rides per capita. It doesn’t fix any of the problems I have with Fast Pass, but I’m willing to give Disney the benefit of the doubt that this is an improvement over the current situation.

The longer term goal here is prepping the guest to accept the xPass when it becomes available. Remember above when we said guests who like to plan everything out can really maximize fastpass. Well xPass, a program that lets you reserve your dining, show, and ride times before you even arrive in Orlando, will be perfect for those sorts.

If this sounds like a cruise ship to you. You’re on to something. Walt Disney World, at least, does appear to be moving closer to offering as many aspects as it can on an all-inclusive basis. Hotel, transportation, dining plan, theme parks are all included in your on-property package already.

Now, I’m not actually opposed to Disney having a more all-inclusive option. I’m a big fan of SeaWorld Orlando’s Dine-All-Day deal. If you’re in the park for two meals and a snack, it’s a big savings. Encouraging guests to stay longer for food or entertainment is preferable over Fastpass in this regard. The longer people stay in the park, the more money they spend.

What I am concerned about is xPass and the all-inclusive element will impact day guests and guests who choose not to stay in a non-Disney hotel, or just can’t afford to. All that’s completely up in the air, at least officially. If the number of xPass available each day is very small, and it subtracts from fastpass availability, then it might be okay. But at the same time as a local I don’t like that either.

As you can see there are still a lot of details we don’t know. So my thinking is still forming regarding the changes to Fastpass and xPass.

As for the March Fastpass changes, I think there are still some questions that need to be answered.

What is a guest supposed to do if they show up at their appointed time but the attraction is down. Will they be given a new return time? or just told to come back later and take their chances the next cast member lets them in. Just what is the list of acceptable excuses, or will front line cast members be allowed to make a judgement on a case by case basis?

Here are a few tweaks I would like Disney to do to improve the FastPass system a bit.