Eastman Kodak, longtime sponsor of Disney’s domestic theme parks, is reportedly considering bankruptcy any day now. It’s not clear what this means for the parks, Kodak is still the sponsor of the guidemaps that 1o’s of thousands of guests pick up and use every day and those wonderful photospots. The photo kiosks, however, have passed into history. The guidemaps are very much needed and used. If Kodak bows out, it will be interesting to see who steps into the gap.

It is likely that the sponsorship will be taken over by a tech company focused on family travel or memories, possibly even one having to do with digital photography. One such company is Instagram, known to iPhone users for its ability to create photos with character and share them instantly with friends. For an example of how Instagram is being used by guests at Disney, check out the great project, InstaParks.

But at least one Disney fan is bucking the digital trend. Donnie has gone old school with his grandma’s old Polaroid 600 camera. Polaroid is another company having a hard time with the transition to digital. They don’t even make film for the Polaroid anymore, but a group of former employees bought the rights to make the film and now produce some limited quantities. You pay for it but the results are terrific, in a retro sort of way. 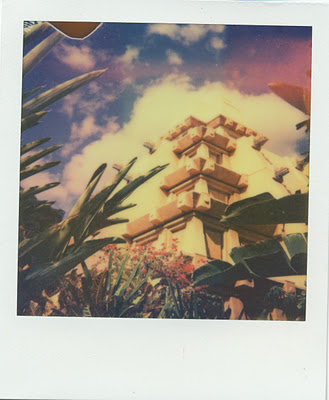 I love this shot Donnie took of the Mexico pavilion in EPCOT’s World Showcase. You can find more from his outing on his blog where he promises further excursions in the art of Polaroid Disney.

If you love taking retro format photography of Disney’s theme parks let me know. I’d love to see more like the above.