Major kudos go to Sam Wilson of the “Theme Park Concepts” blog for deciphering what the park layout and attraction mix of Shanghai Disneyland is most likely to be. Wilson examined public presentations, models, and visual clues to come up with the following map: 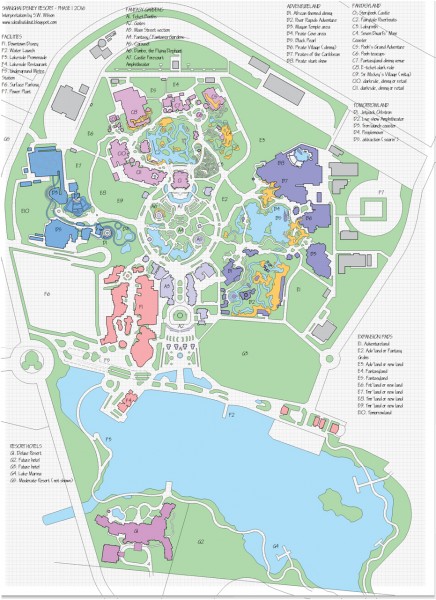 As Wilson says, “my drawing is a 2-D translation of the 3-D massing & CAD models, the rough placement of vertical structures & paths is fairly accurate. It is not a work of my imagination. The actual content (what kinds of attractions those structures contain), on the other hand, is more based on informed guesswork. Still, as far as the physical layout of the resort is concerned, what follows may be the closest thing to a park map of the current iteration of Shanghai any of us outside WDI will ever see.”

When it comes to Shanghai Disneyland its important to remember that while this is a ‘Magic Kingdom’ style park, it’s also not a Magic Kingdom style park. There is a lot more garden space than the typical MK park. Wilson has a lot of those spaces pegged as expansion pads, but my understanding is that Disney Imagineers want to keep the park feeling more like a giant garden. Imagineers believe one of the reasons Hong Kong Disneyland isn’t doing as well, is that the park doesn’t fit in with Chinese sensibilities. By building a Magic Kingdom with room to spare, they can address some of those issues.

If Wilson’s map is accurate, Disney is still only planning 3 lands (Main Street is a mall not a land) and 18 (or so) attractions at opening. That’s a very soft number for a new theme park. I think that opening a park with so few attractions actually scares off guests. We’re not in 1955 where no one had heard of a theme park before. Today guests have choices, some of which include developed parks that have been around for decades, even in China. For only 18 attractions, the value just isn’t there.

I will say the park looks beautiful in the concept art that has been released. It will quite possibly rival Disneyland Paris in its detail and design. There are a lot of blanks remaining to be filled in, but since vertical construction will officially start in April, we will start to see more answers soon.