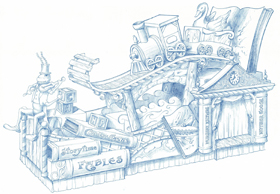 Orlando is no longer thought of as solely the house of the mouse; since the boy wizard set up shop up International Drive, people have begun to take notice that Universal has a terrific staff of creative developers of its own. That shouldn’t be a shock since many of them got their start in Walt Disney Imagineering, but fell victim to the budget cut blade over the years. Heck large sections of Islands of Adventure started as concepts for a Disney theme park.

To honor and celebrate this design talent, The Orange County Regional History Museum in Downtown Orlando is hosting “The Serious Art of Make Believe“, an exhibit that concept art, models, costumes, and other behind the scenes secrets of Universal Studios. There’s even a whole section on Halloween Horror Nights, which is a unique artform all its own.