It’s become something of a running joke at Walt Disney World, the company files papers, clears land, and even begins work on the next Disney Vacation Club (DVC) hotel before they ‘officially’ announce it. By that time, anyone who wanted to know, already knows that DVC is spreading its tentacles into another section of the resort.

This time they didn’t wait quite that long. Ground clearing had only just begun, when the company decided to officially let the world know of its plans to build a new DVC tower, this time at the classiest joint in town, the Grand Floridian. Of course, construction has already been wrecking havoc with parties at the adjacent wedding chapel. 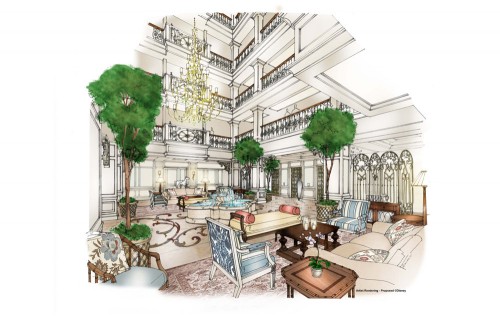 With an estimated opening date of late 2013, this new resort experience is slated to be the 12th DVC property. In addition to villa accommodations, plans for the expansion include a children’s water-play area and other amenities.

“We continually look for ways to expand Disney Vacation Club by creating resort experiences that our members will love,” said Claire Bilby, senior vice president and general manager of Disney Vacation Club. “With the continued popularity of Bay Lake Tower at Disney’s Contemporary Resort, we are thrilled to offer our members and guests a new resort option along the monorail system with easy access to the Magic Kingdom Park, as well as a variety of shopping, dining and recreation experiences.”

Like they did at Disney’s Animal Kingdom Lodge, the DVC rooms will probably creep into the existing hotel as well. That actually works well since some of the resorts luxury traffic will no doubt shift to the Four Seasons resort once it opens. If Disney can sell that capacity as time shares, that’s a 40-year source of maintenance costs covered. From a business perspective that’s nice, the question is will it change the atmosphere of the overall resort.

Adding the next DVC to a monorail resort seems like a natural after the success of Bay Lake Tower at the Contemporary. It’s a very small amount of units, which does make you wonder about Disney’s sense of potential for DVC going forward. I guess a small move is good while the uncertainty in the economy remains.