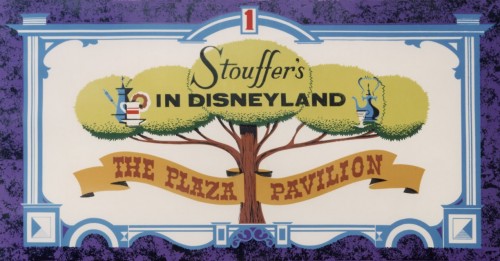 You can tell just by looking at his artwork that Disney artist Kevin Kidney is the best kind of preservationist. Not only does he try and document the great moments of the past, but he works hard to share them with the rest of us in a way the brings home the experience with new emotion. Alas, Disneyland doesn’t have a preservationist bone in its body.

As new projects are developed, no one expects Disneyland to keep everything right in place. But some attempt to save the major pieces of art would have been appreciated. Perhaps the worst offense was the destruction of Mary Blair’s Tomorrowland Murals. But there are many of examples of lost history.

Kevin Kidney shares a tale of woe about a lost mural at the Plaza Pavilion:

In 1997, at the end of the summer, the Plaza Pavilion restaurant closed forever, but the building reopened sometime later as an Annual Passholder sales center. Stopping in to look at the mural, as I often had before, I was alarmed to see that it was gone! The wall was now covered with embossed wallpaper and there were a few framed posters and a cake mold nailed to it.

I expressed my horror to a friend at WDI who informed me that the mural was considered to be a treasure, and had not been removed or painted over, but was actually safe and sound behind the new wallpaper.

Alas, even the best intentions of the Imagineers is often not enough to prevent this tragedy. Read the rest of the post at Kidney’s blog for the sad story.

If you have a photo or more information on the lost mural, please share it with us! I’d love to see it again.