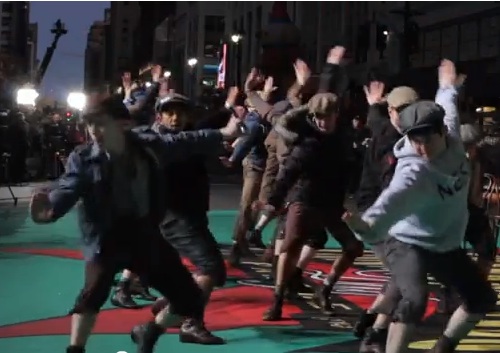 I don’t know about you, but I woke up early on Thanksgiving morning just to make sure I saw the Cast of Disney’s Newsies perform before the big Thanksgiving Day parade. Their segment featured the dance number “King of New York,” and it was only a few minutes long, but the whole experience took rehearsal, downtime, and some clowning around, to pull off.

Here’s a look behind the scenes with the crew:

As announced previously, Disney’s NEWSIES, the breakout new American musical, is coming to Broadway in New York City! The show will play the Nederlander Theatre for a strictly-limited, 101-performance engagement following its critically-hailed run at Paper Mill Playhouse earlier this fall. NEWSIES will run March 15 through June 10. Tickets go on sale Jan. 30!

To sign up for a special ticket offer, visit http://www.newsiesthemusical.com.