Continuing our stroll through Walt Disney World… Part one had a bunch of Fantasyland Expansion photos, let’s start with a few more: 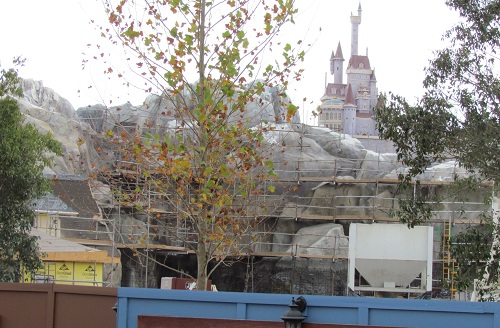 A lot of rock work is still underway, but those trees you see in the foreground are newly planted. They’ve also been doing some other landscaping, which is behind the wall, so you can’t see it. On the left you can see that more progress has been made on Belle’s cottage. Here’s a shot showing how close the rock work and castle wall from Beast’s castle comes to the back of Gaston’s Tavern. Note the saddle roof design. Should be really beautiful when finished. Click image for Larger. Here’s another view where the saddle roofs are more obvious. 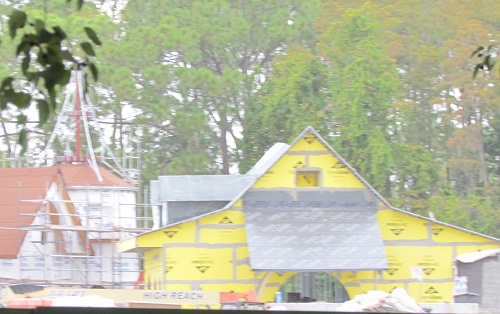 This is the opposite side of the Village, which I believe will be the restrooms. There’s a whole new section of rock work going up between the Little Mermaid and the entrance to Story Book Circus. Here’s another view. You can see that they’re pretty much done with the other rock work before they added this section. 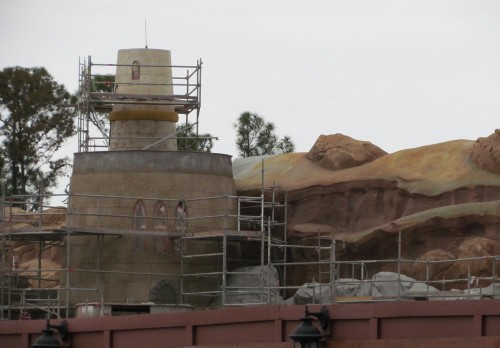 Click image for Larger. Speaking of almost done, Prince Eric’s castle is looking good, but I remember it being closer to a light tan in the movie. Maybe it was just the cloudy day when I took this. 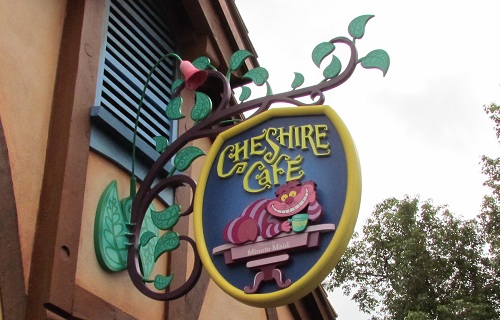 Some of the other construction in Fantasyland has wrapped up. Enchanted Grove is now the Cheshire Cafe, continuing the Alice in Wonderland theme throughout the area. 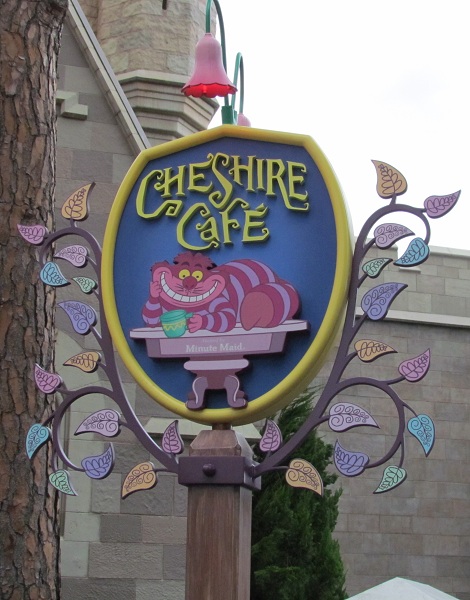 Here’s a second sign, closer to Winnie the Pooh. 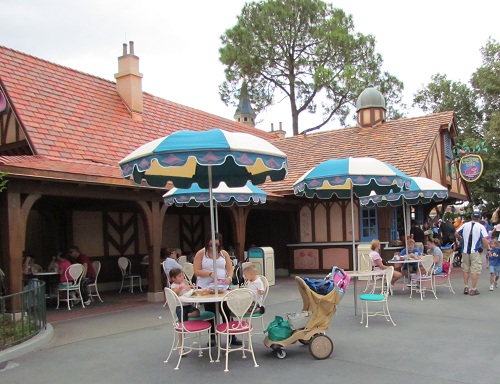 Unfortunately the refurbishment of the building didn’t include new tables, shades, or even trash cans. The same faded furniture is right back out there. There wasn’t money on the budget to repaint some trash cans? On the other end of Fantasyland, they’ve added some new walls that push out a bit into the stroller parking area. At some point they will have to get serious about leveling this area to build the new restrooms.

I don’t have a good picture of it, but I did want to give kudos to the people who updated the Ticket and Transportation Center parking lot system. It’s much more guest friendly and faster to get to your car at the end of the night. The Heroes and Villains system is easy to remember and they’re no longer filling up the old Donald and Daisy rows (which have new names) before starting to park close to the TTC again. I always felt sorry for guests who were parked at the back of Daisy and had to walk all the way to the tram only to get to the TTC and see that cars were now being parked within walking distance to the monorails. This new system is much better show. It’s not perfect, but it’s a great improvement.

Speaking of the monorails, Monorail Peach is online and operating smoothly, but they’re still running reduced hours on the express side. That makes for crazy lines on the resort monorail after Mickey’s Very Merry Christmas Party. So keep that in mind if you’re planning on attending.

Thanks for sticking with me through part two. In part three we’re venturing outside of the Magic Kingdom for a few other new things.