Dancing With The Stars Finale – The Mirror Ball Goes to…. 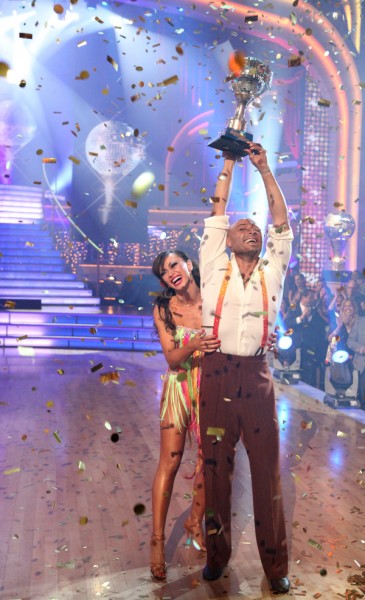 There was no real surprise in last night’s finale episode of Dancing With The Stars. J.R. and Karina took home the coveted Mirror Ball Trophy! Jumpy claps all around! Here’s how the night went…

The couples each chose one of their dances from this season to perform again. Ricki and Derek decided to reprise their tango to the theme from “Psycho.” The judges all gushed over it. Rob and Cheryl repeated the fox trot that Rob dedicated to his father. Len loved his footwork, declaring it the best he’s seen from any guy on the show. Wow! J.R. and Karina reworked their spunky jive. Despite a couple of errors, the judges were entertained.

The judges ranked the dances, awarding Ricki and Derek first place with 30 points. J.R. received 28 points, and Rob 26. Those scores were combined with Monday’s scores, to give Ricki a total of 84, Rob 83, and J.R. 82. Tight race! I felt like I needed an algorithm to keep track of all this.

Then came the first elimination of the evening. When Ricki and Derek were eliminated, I gasped. Loudly. So did the audience. From the beginning of the season, I was almost certain they would make it to the final two. Rob Kardashian with the upset!

One of my favorite parts of the finale is always watching the eliminated contestants come back to the ballroom. Kristin and Mark did an amazing jive, and Chynna and Tony conquered the tango that originally sent them home. Both performances proved that they were eliminated too early in the competition. You guys, Carson vogued! It was a riot. He adds so much fun to the show, hopefully we’ll see him next season in some capacity. Fan favorite Chaz returned, and David and Kym did a spirited quickstep to “We Go Together” from “Grease.”

The final two couples returned to the floor to perform a fun instant samba to Ricky Martin’s “Shake Your Bon Bon.” Len gave them a standing ovation, Bruno remarked that Rob really used his bon bon (tee hee), and Carrie Ann said it was a great way to end the season. Both pairs received perfect 30s, giving Rob a total of 113 and J.R. a total of 112. Seriously, has someone created a spreadsheet for me yet?

After combining the judges’ scores with the audience’s votes, J.R. and Karina were awarded the coveted mirror ball trophy. I have to admit I’ve rooted for them since the beginning, and everyone there seemed really happy that they won. J.R. definitely brought an amazing light to the show with his inspirational attitude. Congratulations J.R. and Karina!

Thanks for following along with a fabulous season full of emotion, surprises, and drama. I’m going to samba off into the sunset. See you back here in March!