Dancing With the Stars Week 9 Recap – Was That a Parade Float? 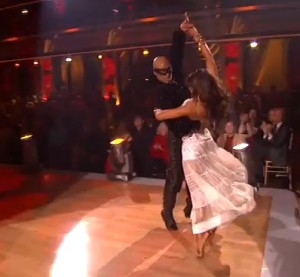 Week 9 brings us to the semifinals! I was so stressed about this show that I could barely watch. True story. Each couple had to perform three (yes, three!) dances.

Hope and Maks began the evening with a paso doble to Miley Cyrus’ “Can’t Be Tamed.” Hope battled some serious shoulder pain in rehearsals, but seemed to thrive on the adversity. The judges agreed that she was successful in displaying the right attitude for the dance, but were not as pleased with her technical performance. Triple 7s gave the pair a 21.

Next, it was J.R. and Karina’s turn for the paso doble. We saw J.R. twist his ankle during rehearsals (major ouch), and it definitely affected the dance. Bruno and Carrie Ann noticed that his injury had a negative impact on his posture, and Len called him more “Zero” than “Zorro.” Insert sad face here. Judges’ scores of 8, 7, 8 gave the couple a total of 23.

Rob and Cheryl arrived on the dance floor shaking maracas on a horrifying parade float. Yikes. Thankfully, things improved as they began their samba. Rob did a great job of shaking his hips during the energetic routine. Despite his last name, I like Rob more and more every week. Unanimous praise from the judges translated into scores of 10 (wow), 9, 9 for a 28, which is Rob’s highest of the competition.

Ricki and Derek brightened up the ballroom in canary yellow costumes they donned to samba to “Jump in the Line (Shake, Senora)” by Harry Belafonte. It was a fun and rousing dance. Len said Ricki took a giant step towards the finals, and Bruno and Carrie Ann loved it all. Perfect 10s from the judges gave them a 30!

We were treated to a stunning Argentine tango by a group of the professional dancers. The lifts were incredibly daring. I’m pretty sure I watched with one eye closed.

Hope and Maks returned to the dance floor to perform their Argentine tango to “Whatever Lola Wants.” Maks was on his best behavior with the judges, but this time Hope seemed to be the slightly disgruntled one. The three judges agreed that this performance was better than their first, and gave them triple 8s for a 24, and a total of 45 for the night.

J.R. came back with a freshly taped ankle to dance the Argentine tango with Karina. He was obviously frustrated that his injury was hampering his ability, but he pushed aside the pain to deliver a solid routine. The judges awarded them triple 9s for a score of 27, which brought them to a total of 50 for the evening.

Next to tango were Rob and Cheryl. Their sexy dance delighted the crowd and the judges. Rob is certainly finishing strong. Triple 9s gave them a 27 for this dance and a total of 55.

Ricki and Derek didn’t disappoint the judges with their Argentine tango. Len thought it was really good, and Carrie Ann declared that Ricki’s new core strength has given her the “pop.” I thought this was a term reserved for HGTV. Hmm. Scores of 9, 10, 10 totaled 29 and brought the pair an overall 59.

The final event of the evening’s competition was a cha cha relay to “I Like How It Feels,” by Enrique Iglesias. Each couple performed a portion of the song, just like a relay race. The judges awarded Hope and Maks 4 points, for a total of 49. J.R. and Karina scored 6 points, which brought them to a total of 56. Eight points were given to Ricki and Derek, which gave them a total of 67. Rob and Cheryl were the top scorers of the relay, earning 10 points and boosting their total for the night to 65. Kind of surprising, but yay Rob!

Whew, what a night. There was an inordinate amount of math involved in writing this post…what a novel way to use my business degree. I’m hoping the audience’s votes ensure J.R. a much-deserved place in the finals. We’ll find out tonight! Who do you think is going home?

Video highlights from the episode are below the jump: