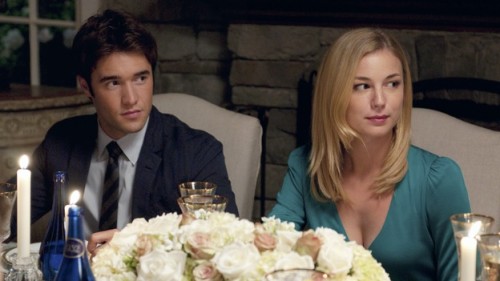 I wouldn’t say the celebration of Victoria and Conrad’s 25th wedding anniversary was anything to call home about.

Yet again, Revenge was a total trip this week.

Right away, we have a New York Times reporter interviewing Victoria and Conrad about their successful (barf) marriage. (Since when do things like this get on the front page of the NYT?) Victoria is just about ready to burst with the whole manifestation of their fairy tale relationship.

Big question: Does anyone else think that Charlotte is not Conrad’s kid? (And perhaps Emily’s half-sister/David’s Clark’s child?) Think about the Hamptons Exposed video where we have Victoria saying that Charlotte should never have been born. In last night’s interview, Victoria forgets to mention Charlotte when she talks about what has kept their marriage strong. Conrad is also ALWAYS spoiling Charlotte. I know being a daddy’s girl isn’t some new-fangled concept but we know that Conrad uses his money almost always for evil. (Keep in mind that everyone seems to have a two-sided story when it comes to this show, and we still have not figured out Charlotte’s.) 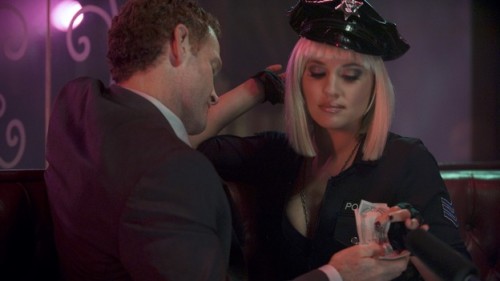 Daniel gets interviewed for the piece too, and I swear these writers are just making me fall for him too. I can see Emily’s conundrum for sure. He says nothing but great things about Jack’s bar and working there, and he is also pretty taken with a certain girl, who didn’t want her name involved in the article. Enter our bestie, Tyler, who, of course, indulges the interviewer and soon she is knocking on Emily’s door asking her own questions. Emily decides to give in to the interviewer and she and Daniel end up becoming a focal point of the newspaper article. (William & Kate of the Hamptons, as Ashley calls them later.)

The NYT writer was not Emily’s first visitor of the day though. Earlier, Emily walks into her home to see that Frank is hanging out with some confidential information. He knows that she was in a juvenile detention center and convicted for assault with a deadly weapon. Frank vows to get the dirt on her, and expose her to everyone. Emily tries to pay him off, but Frank will not be bought. He leaves, and we are surprised with another twist in the story: just how far does Emily’s plot stem? Pretty far, it seems. She digs out a secret cell phone from under her gorgeous wood flooring and calls the warden from the juvenile detention center. She needs her help.

Frank shows up at the place to chat with the warden about Emily, who goes on to say how Emily has been so generous about giving back to the place she had once stayed in. She tries to veer him off Emily’s track but Frank is too determined. He breaks into the office later and steals Emily’s files. You have to admire Frank for his persistence. (Frank even visits Lydia in the hospital while Victoria is there. She calls security on him but he has a lovely line: “I’m going to redeem myself for you, Victoria, or I am going to die trying.” Oh Frank.)

In the meantime, Nolan hires a bodyguard since Frank is on his trail. Emily also gives him a job – dig up anything you can on Tyler. (She tells Daniel that Tyler was the one who involved her in the article, and Daniel tells Tyler he better start respecting his relationship with Em. Go Dan!) This is where things take an unexpected turn. I mean, nothing is really unexpected on Revenge but this really threw me for a loop.

Nolan discovers that Tyler is making money being a boy toy. Like, to other men. I know other people have pointed out whether Tyler could be into Daniel. The vibes were there last week, but Tyler is also a nutjob so I didn’t know what to think. Tyler dishes to Nolan that his parents lost a lot of money a few years ago, and that’s why he is interning for Grayson and also doing this “hustler” thing. Now I’m not sure if Nolan admits to his own bisexuality to sort of string Tyler along but all of a sudden they are making out. WHAT?! (All this time I thought maybe Nolan would start to crush on Emily.)

Back to the Graysons, where there is laughter and smiles and a ton of anniversary bliss. Not! An awkward dinner for an unfortunate couple is more like it. Charlotte invites Declan even though her mom tells her she can’t. Emily frames the Graysons’ wedding invitation (good idea!) and Conrad can’t help but throw jabs at Daniel’s bartending gig. Paradise for all. Declan is immediately offended by Conrad’s comments (especially after the NYT article has boosted the bar’s business) and lets the cat out of the bag about Jack expressing his feelings for Emily and her sort of walking all over them. He also has to bring up Emily dropping off a small gift for Jack that afternoon (a mariner’s compass thanking him for his work on the porch). Daniel is completely shocked. And Declan decides he has had enough and leaves the party. Everyone else follows suit.

Does anyone else find it weird that Emily hardly acknowledges the fact that Declan is Jack’s brother?

Back to Frank. In a strip club. Ready for another twist? A girl named Amanda Clark works there. Frank uses cash for a private moment to get the dirt. Seems our Emily brought her identity back when they were in juvy together. “Amanda” spent all the cash and instead of fighting back for her own name she decided being Amanda was much better. She asks Frank to meet her outside after her shift is up.

Oh, Frank. We hardly knew ya. “Amanda” kills the guy with a crowbar outside in the parking lot. And throws him in some shrubbery. But not before he called Victoria to tell her that Emily is not who she says she is. “Amanda” also steals his phone (still buzzing with Victoria’s voice) and uses it to find out where “Emily” is.

Are you keeping up?

In the Hamptons, Victoria and Conrad get into a screaming match where she demands that he leave. He tells her he never loved a woman like he loves her, and it’s revealed he had been married when Victoria first came into the picture. He seeks refuge in Lydia’s hospital room, where she wakes up. (Miraculous, really.) Tyler returns from his rendezvous with Nolan (still not getting this) and shockingly admits to Ashley that his family has lost his money and that is he hoping to make himself indispensable to Conrad to secure his future. In a rare moment where Ashley is not freaking out about party planning, she divulges her position may serve another purpose as well.

We also get a rare moment between Daniel and Victoria. I liked it, actually. Daniel asks why Victoria doesn’t like Emily and she says she just doesn’t want him to get hurt, and when you fall in love, you risk that. They hug.

Like a good boy (?), Nolan calls to check in with Emily and says things are under control. Um, did Nolan and Tyler have sex? It sure seems like they did.

Daniel goes over to Emily’s and tells Emily he is also falling in love with her. (Emily clings onto the swing that Jack has fixed.) Upon falling asleep, there is a knock at Emily’s door. Joy of joys, “Amanda” has returned! What a happy reunion! Or not really. Flashback to the days of juvy and Emily’s terrible black wig. A little tension between the two as they start to pummel each other.

Never a calm second in Revenge-land is there?

Now we just have to wait 2 weeks for the next episode. That’s okay; I think I need a breather to process all that has happened thus far.

Revenge is on Wednesday evenings at 10pm on ABC. Check out www.abc.com to view the full episodes you may have missed. ()