Winnie The Pooh DVD a Short, but Excellent, Visit With Childhood Friends 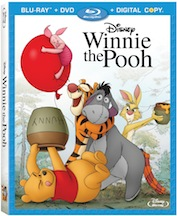 I was pleasantly surprised at how good a job Disney did bringing back the classic Winnie the Pooh characters in the 2011 Summer theatrical release of “Winnie The Pooh.” If their goal was to closely duplicate the animated films Walt Disney was making in the late ’50s and early ’60s, they met their mark. At the same time, the story and characters received slight tweaks making it more accessible for today’s audiences. Now you can add “Winnie the Pooh” on DVD, Blu-Ray, and/or Digital Download to your collection.

The story featured rich characterizations (both in writing and animation), tremendous voice work and tunes you could hum. During my viewing in the theater, I felt let down by the songs, but upon subsequent viewings, I’ve found the music to be something of a strength.

Another strength was the voice work. Narrated by John Cleese and featuring the vocal talents of legendary voice actor Jim Cummings (over 350 voices) and a host of other distinctive actors including Craig Ferguson (TV’s ‘The Late Late Show with Craig Ferguson’), Tom Kenny (TV’s ‘SpongeBob SquarePants’), Bud Luckey (Toy Story 3) and musical performances by Zooey Deschanel. Ferguson’s take on Owl was particularly appreciated as he helped the bird grow into a part that was larger than his previous incarnations.

The DVD/Blu-Ray combo is nice, but I did feel a bit let down by the lack of extras. Disney is hit and miss in this area, mostly miss. Sadly, you’ll have to wait for future editions to get things like a commentary, behind the scenes footage, and other standard extras.

Instead of padding the feature to make it longer, Disney added The Ballad of Nessie which I felt was artistically wonderful, but lacking storywise. However my friends and family tell me I’m daft and Nessie was wonderful. So your mileage will vary.

More details on extras below the jump:

·       Exclusive bonus short “Mini-Adventures of Winnie the Pooh: The Balloon” – In this charming short, Pooh comes up with a daring plan to get a hold of some honey by fooling a group of bees.

·       “The Ballad of Nessie” – The animated short film included in the theatrical release is the heartwarming tale of how Nessie found her new home in the Loch Ness.

·       “Winnie the Pooh and His Story Too” – A fun and informative behind-the-scenes look at the film, designed for the whole family. Hosted by John Cleese (narrator of the film), and with occasional help fromPooh himself, this featurette explores Winnie the Pooh’s history from his beginnings as a character in a book, to his continued life in the movies. The filmmakers reveal how they worked to keep the look of the characters and settings in this movie consistent with their first appearances on-screen in1966. Pooh, being a bear of very little mind, finds much of this confusing, but the Narrator and the filmmakers make it all clear to Pooh – and you!

·       Sing-Along with the Movie – Follow the red balloon and changing word colors to seven song lyrics featured in the film.

·       Disney Song Selection – “Winnie the Pooh Theme Song,” “The Tummy Song, “A Very Important Thing To Do,” “The Backson Song,” “It’s Gonna Be Great,” “Everything is Honey” and “The Winner Song Finale”

·       Deleted scenes introduced by directors, Stephen Anderson and Don Hall – 3 deleted scenes including “The Tummy Song,” “”Rabbit’s Friends and Relations” and “Pooh Searches for a Tail”