Once Upon a Time: Season 1, Episode 2 – The Thing You Love Most 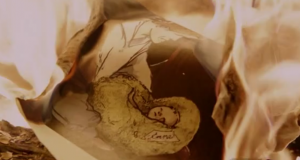 “Once Upon a Time” was back this week, picking up right where it left off. Regina brings Emma a basket of apples and asks that she leave town. Emma does not agree, worrying that the more the Mayor threatens her the more Henry must be in real danger.

At this point, the story moves into the fantasy world, and we go back to the wedding between Prince Charming and Snow White. This time, we follow the Queen after her threat to the happy couple as she conjures up a plan. The Queen decides to use the Dark Curse (against the advice of her magic mirror and an older man who is also in the castle. The Queen takes a visit to the Forbidden Fortress, where we meet her only friend (who turns out to be Maleficent.) The Queen obtains the Evil Curse and unleashes it, but unsuccessfully.

Back in the real world, Emma visits Henry’s shrink and obtains his file, which Regina later has her arrested for. (Emma is framed for stealing the file.) Regina shows off her power over the town and Henry, trying to turn him against Emma as well. Henry still trusts Emma, though, and gets his teacher to bail her out.

Once again in the fantasy land, The Queen visits Rumpelstiltskin to find out how to make the Dark Curse work. He tells her she must sacrifice the thing she loves most, and they make a deal that in the “new land” The Queen must obey every order of Rumpelstiltskin. The Queen returns to her castle, and we discover that the old man is actually her father…and she stabs him, allowing the Dark Curse to be unleashed. The Queen visits her father’s grave and drops a single rose, and his tombstone reveals the name Henry.

In Storybrooke, Emma visits Mary Margaret (Henry’s teacher) who convinces Emma that she must protect Henry. (Also to note in this scene Emma discovers that herself, Henry, and Mary all share a common quirk, they all take cinnamon in their hot chocolate. Perhaps Henry is right, and they are all related.) Realizing this, Emma visits Henry while he is seeing his shrink and promises that she will help him.

Mr. Gold (Rumpelstiltskin’s real world double) pays a visit to Regina, letting her know that Emma is still in town. Mr. Gold offers to help, which Regina denies. After they exchange some word, it is clear that while Regina may be powerful over the town, Mr. Gold is able to strike fear in her. Apparently Mr. Gold is the one who found Henry and brought him to Storybrooke, which makes Regina tremble as she realizes who Emma really is.

Overall, this episode was a nice power struggle between Emma and Regina (which I’m guessing will continue throughout the rest of the series) but ultimately I think that Mr. Gold will continue to wield his power over Regina. While I’m enjoying the main story lines, I hope that later we delve deeper into each character’s backstory. We have seen Little Red Riding Hood, but heard very little from her. A few other reviewers of this series are saying that while it is good, it might have worked better as a mini-series or a made-for-TV-movie. I tend to trust the former writers of LOST, and believe that they have more than a few tricks up their sleeve to make this a long lasting series should it continue to get strong ratings.

What did you think of the second episode?