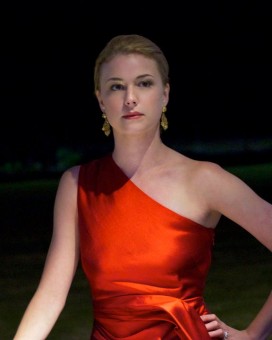 Another Wednesday, another life for Emily to destroy… who will it be this time?

Enter Senator Kingsley. Now a major player amongst the conservatives, Kingsley was the winning prosecutor in the case against Emily’s father, David. The senator and his family are friends of the Grayson’s (of course) and, much to Victoria’s chagrin, are invited to stay at their home as the senator preps for the launch of his reelection campaign.

We soon learn a few juicy tidbits. Back in the day, before the judge made a ruling, Victoria confronted Kingsley about David’s innocence – an admission that was caught by her husband. (His name is Conrad by the way.) “Don’t listen to her! She’s in love with him,” Conrad interrupts, and immediately threatens the end of Kingsley’s political future and his support if Kingsley listens to Victoria. Of course, we all know how that ends.

But, surprise surprise, Victoria seems to have a heart after all. She wouldn’t hold this grudge against Kingsley if she didn’t have deep rooted feelings for David.

To bring Kingsley down, it is revealed there is video evidence of his affair. (Why does everyone on this show have an affair?) That’s not all. Even though the affair ended amicably, his mistress did get pregnant and Kingsley sent her money to “take care of it” (something he is strongly against on the campaign trail). The big moment comes during Kingley’s reelection party when mistress walks in with child (and in red, of course). Fumbling with his words, the senator decides to “retire from public life”. Puts a small damper on the party. (For once, it seemed like Emily and Victoria were happy at the same time. I wonder if these two actually want the same things and in the end, will they meet in the middle? Although, judging from the engagement party, probably not.)

Later we find out that “Kingsley” invited the mistress himself, had been texting and emailing her for weeks, and even provided her dress and plane ticket. Tricky, tricky. All signs point to Emily, but the unraveling of events becomes a bit questionable when the Grayson security realizes the emails between Kingsley and his mistress came from their own home. We all know Emily is behind this but Conrad doesn’t know that. He does, though, remember Victoria’s past conversation with Kingsley and how he stepped in. So here’s another device to keep everyone from suspecting Emily’s quest.

Unlike the other two episodes, Emily’s latest task seems to be less complicated. (Although we learn not only did Emily work for Kingsley’s first campaign but she also bought the mistress’ building and installed surveillance cameras in order to get the videos. “That is commitment.” Nolan speaks the truth.) She also teams up with Nolan again, which I found interesting. She never divulges all the details of her plan but she trusts him enough to get it done for her. Will they actually become friends? Will he betray her (remember she didn’t want him at the engagement party but she also doesn’t like when he pops up anywhere)?

Are you keeping up?

Daniel proved he was more than just a pretty face in this episode, which was refreshing. One second you think they are going on a sweet date, and the next you realize Emily doesn’t do anything without a purpose. A server at the restaurant is the brother of Daniel’s ex-girlfriend – a woman who is now recovering from a broken spine due to a drunk driving accident caused by Daniel (because he was upset with his mom). Brother isn’t too happy to see Daniel there and trashes his car with a golf club. Seems that Daniel’s mommy and daddy paid the poor girl’s medical bills and then paid off the judge to keep Daniel out of jail… as long as he promised never to speak to her again. He feels bad about this and Emily successfully convinces him to go and visit her.

We see just how much of a hand that Victoria has in her son’s love life. Is it because she got burned before? Is it that she doesn’t trust his judgment because hers has been so poor at times? I almost felt bad for Daniel when he told Emily that he thought his mom was following him and he realized he needed to take more control of his life. The kicker: “I’ll always be honest with you.” Emily seems moved by this statement. Is it because she cares about Daniel? Or she knows that she’s basically leading the life of a liar? I can’t be too sure.

Luckily, Revenge was smart enough to open and close with a scene between Jack and Emily. That trusty dog, Sammie, tracks Emily down at her house twice and she has to bring him back to Jack both times. The first time she finds out that Jack’s father has passed away (we hardly knew ya), and the second that he is going to be scattering his ashes alone. She finally sees that the boat is named for her. (“Sammie named it.”) I so badly wanted her to climb aboard the ship (Joey/Pacey moment) and accompany him.

…but I guess it’s too soon for that. Instead we just get a staring contest. That’s better than nothing, I guess.

I did enjoy the parallel of Declan fighting back against the rich kids who beat him up. Even though he finds out that (SHOCKER) Charlotte’s “boyfriend” is cheating on her… and has the proof recorded from the source (Nolan helped him hack into his webcam), he sends her a sweet video instead… as in “Hi! I’m the nice guy! Don’t forget about me when you find out about your loser boyfriend who doesn’t really are about you.” Go Declan! (However, his ambivalance to his father’s death was bordering on annoying and cliche… “just because he is dead doesn’t make him my father!” Can we rise above the soap opera dribble please?).

Oh, and as if there isn’t enough to keep straight, Daniel’s Harvard roommate, Tyler, joins the fun. In less than two seconds, he already has his eye on Ashley (Emily’s friend and Victoria’s assistant) and seems he may be around to stir up trouble…

In the final scene of the show, we get another flashback (flashback in a flashback). David and Victoria in bed together. He gifts her a pair of earrings, and she promises to think of him every time she wears them. Tonight with tears in her eyes (does that sound melodramatic) and a sad smile, we see she has been wearing them. So her character is more multi-dimensional than originally thought. It is most clear in this episode that her feelings for David were always genuine and continue to be.

Why is Victoria so bound to Conrad?

And does Emily realize that Conrad is the one she is really after?

As always, I’m left with more questions than answers and wondering just when Emily’s luck will start to run out… she can’t keep this streak going forever.