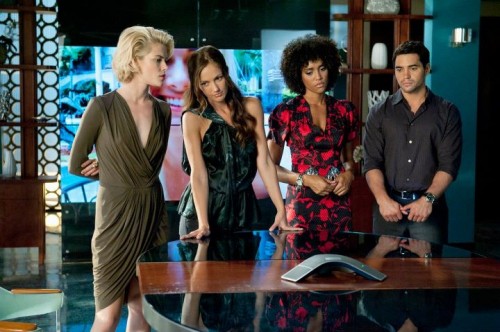 So we start off Episode 3 with a flashback. We join a group of shady police officers giving out some shady money (Do you see a trend?) and we also see…Kate?!? She chases down a shady press photographer (I promise, last shady of the recap!) who has found out everything about her group of police officers. We jump back to current time and are introduced to the new case. A girl has gone missing on a cruise…and it is Amanda, the reporter who ruined Kate’s life. (OH SNAP!!!)

Though a little confuzzled (Yes…I just created a new word, yes…I will use it every day for the rest of my life) Kate agrees to go along with the case. They go undercover (In a very elaborate scheme might I add!) on the cruise line to figure out what happened to her. After some work, they figure out a casino card dealer is working for “The Dark Side”. These people seem to be labeled by these purple, unusual looking, flowers. Eve gets good with the dealer and ends up in his cabin….which is extremely well done for a low-on-the-totem-pole casino worker. She grabs a picture of the flower for the crew and jets. Back at the “Angels Headquarters on Water” they figure out that Bosley needs to disguise himself as one of the “bidders” on this “biddable item” to find out where Amanda is and what the heck is going on!

As you know, I try not to give TOO much away in the episodes so you can watch and enjoy…so here is a small synopsis. Drugged up drink, Bosley DOWN, Naked in bed and on a mysterious island, bid here…bid there, sweatshops, more drugs, Green House? All Angels are DOWN! And….that’s where I will stop. But first….everyone’s favorite…

Top 5 Things We Learned from Episode 3

That’s it for this week! Seems like this show won’t be lasting for a while, according to Entertainment Weekly, they predict it will be gone by Thanksgiving. I enjoy it, so let’s hope it stays longer! Again, Thursday’s at 8/7c on ABC!

previousRevenge 1.3: Betrayal… Round & Round We Go
nextWinnie The Pooh on DVD 10/25