Newsies! Carry the Banner into the Paper Mill Playhouse 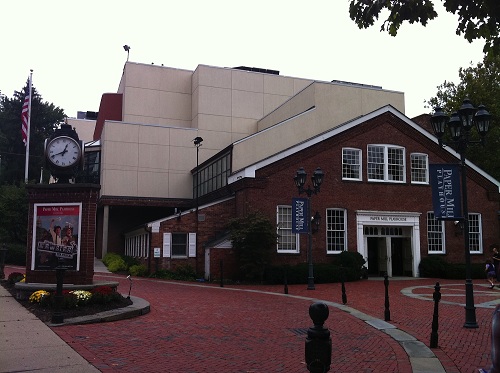 I was 12 years old the first time I saw Newsies. I was one of the few people to see the Disney movie musical in the theater. There was just something about the story and music and I was hooked. Before it was released on VHS it aired on the Disney Channel and you can bet that I had a taped copy and watched it over and over. I knew all the dances and the music. Family car rides were sure to have a music sing along including all the talking parts. I was a fan from day one.

Ever since I saw the movie I just knew it had to be on the stage. Being in theater I would picture what the sets would look like and how they could adapt it to the stage. Once I heard that Newsies was hitting the stage I had to get tickets. I set the reminder on my calendar and bought 5 tickets for September 24th’s show. It was a family event, my mom, brother, sister, her husband and I set off on the hour ride to the Paper Mill Playhouse.

As we walked into the theater there was music playing, transporting you to back to 1899. We took our seats and got ready for the production to begin. 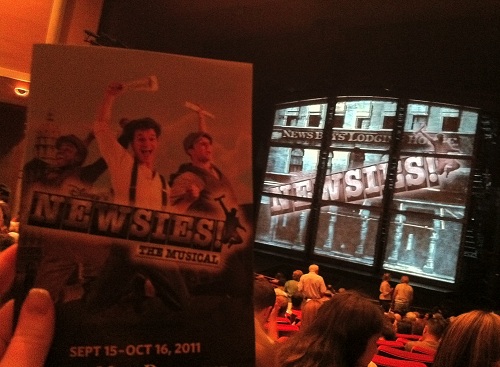 The lights went down and you are transported to a rooftop where you meet Jack Kelly and Crutchie for Santa Fe. I know, I know a weird way for the show to start but this just reminds you that this is not the movie, it is a stage show. But then you hear Carrying the Banner, and the chills start. This is what every die hard fan have been waiting for!!

The show was amazing, you meet all your favorite characters from the movie including Race (Racetrack), Specks, Davey, Les and Medda live and in person. You are also introduced to Katherine Plumber, Jack Kelly’s love interest. In a cast full of guys, she holds her own and is an amazing addition.

I had chills though out the show. Seeing it live on stage was something that I have waited years for and they did not disappoint. The set design is something I just can not get over. You never felt like you were watching a stage show. The sets moved and the acts just blended together, no filler as I am used to in other shows.

I was very happy to see that they kept the choreography. Broadway jazz is just so powerful and made the movie what it was. I had the same feeling when the dance numbers would come. The cast was full of great dancers who entertained. Oh and King of New York was just fantastic with the tap dancing. The only way the number should be performed.

After the cast took their final bows and finished the number the audience was on their feet, with me right along with them. I loved the show and was just so sad to see that it was over.

As I reflect back on the show there were just a few things that I found lacking. First being there was no Racetrack to the start the show explaining who the Newsies were. If you did not already know that this was based on a true story you would have never known. Another being some of my most favorite lines from the movie, you know what I am talking about, the lines that stand out and you repeat over and over again where not in the show. Most common one being Spot Conlon when he said “I say, is what you say, is what I say”. Its just the little things that only the die hard fan know. Also Spot Conlon did not have as big of a role here as in the movie, but I am bias, he was my favorite newsie. Finally the ending was a little lacking but there is only so much you can do on stage. I mean you can not get “a thousand voices singing” in the theater. But they did a great job with what they had to work with.

The show runs until October 16th. I have read on facebook that many fans from all over the country are flying in to see the show. I myself have friends flying up from Orlando just for Newsies. I do not think anyone will be disappointed. Just remember that this is not the movie. Things had to change to fit it on the stage. Yes some of the songs are a little different, but its still Newsies. This show is every fan’s dream.

So would I go see the show again, you bet, who wants to buy me a ticket?

previousRisk and Reward, is Disney Parks & Resorts on the Right Track?
nextWho Are The Real Stars of Dancing With The Stars