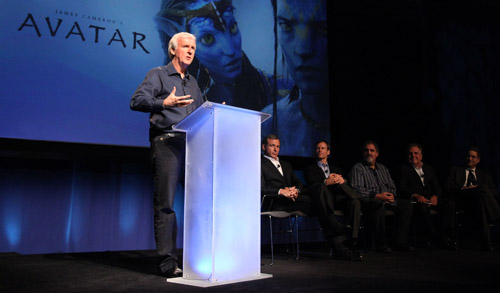 Earlier today, Disney held an Imagineering press conference with James Cameron to announce that an area based on the world of “Avatar” would be added to Disney’s Animal Kingdom. Fans around the world were quick to evaluate this addition. People took to message boards, social networking platforms, and the Disney Parks Blog to voice their opinion. The post on the parks blog has already received 130+ comments, far more than any other post in the blog’s recent history. Here are a few of my favorites:

I would assume that Michael is correct in his comment. Beastly Kingdom seems like a certain no-go at this point, but perhaps Imagineers will be able to infuse some of the ideas for this forgone area into “Avatar Land.”

Unlike many previous announcements that the public is usually already aware of because of internet leaks, Disney managed to keep this one quiet until the official announcement.

Not everyone was excited, as this move is based on a non-Disney franchise. Disney has lately been moving toward characters and concepts from outside their current store.

Many fans expressed concerns that Avatar does not fit into Disney’s Animal Kingdom. In my opinion, Avatar is based on environmental themes that DAK strives to embed within the park, and the film includes several animal-like creatures that will feel right at home.

Not only were fans commenting on the official Disney Parks blog, but popular Disney message boards like WDWMagic and Disboards exploded with opinions, ranging from furious to ecstatic. Several people have been likening this project as a response to Universal Studios winning the Harry Potter contract. Many fans thought that the Fantasyland expansion was not enough, but Avatar might be a bigger answer. (I do not think that these comparisons are just.)

In my personal opinion, this sounds epic. I am a big fan of “Avatar,” and I have high hopes for the two sequels, currently slated for December 2014 and December 2015. “Avatar” feels like a natural fit for a theme park. Several of the flying scenes come to mind, and I hope with James Cameron working side-by-side with Imagineers that we will see some new technology in the park that doesn’t exist anywhere else in the world.

Construction of this new project to begin in 2013, well-timed after the Fantasyland expansion and before the Avatar sequels. (No “open” date is currently given, though. Hopefully concept art and more details will be released for hungry fans like me.)

One other thing to note is this line in the official press release:

Future locations for additional AVATAR-themed lands will be determined with our international theme park partners at a later date.

Will we see a clone of “Avatar Land” or any of its attractions in any other Disney parks? Only time will tell.

Update: You may be interested in reading the response to some of these comments from Walt Disney Parks & Resorts President Tom Staggs.