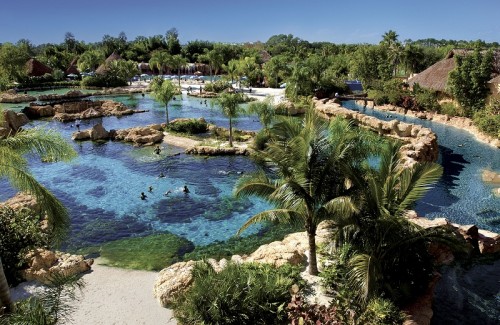 Update: All guests and employees have been released from care.

Local news reports that 5 cast members and 3 guests were taken to the hospital after a lightning strike at SeaWorld Orlando’s Discovery Cove. Apparently the strike was near the Adventure Photo cabana, which is close to the front of the park, and the Laguna Grill, which is the main restaurant and located near by. Thankfully, none of the injuries are life-threatening.

This brings up the topic of general safety for travel in Central Florida during a storm. Lightning can strike from up to 30 miles away. Most resorts and water parks have lightning detectors that sound an alert whenever there is a strike within 30 miles and the call goes out to evacuate outdoor areas.

At a water park, that often means guests heading back to cars or ducking into a building somewhere. Only a few buildings at Discovery Cove are enclosed, the rest are basically cabanas with two or more sides open to the elements. It is still unclear where the guests and cast members were when they were injured by the strike. But it’s important to heed evacuation warnings when they’re issued. If you are struck, make sure to seek medical attention immediately.

Still, there are times when the first lightning strike is the one that gets you or the storm pops up so fast, that there is no time to evacuate. That’s when its important to remember not to stand under trees (they’re easy targets for lightning strikes) and to get out of the water as soon as possible.

Luckily, most lightning strikes are survivable and that looks to be the case here. We hope everyone recovers swiftly and completely.